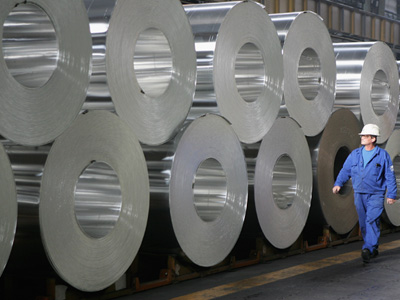 Dallas, Texas 08/06/2013 (Financialstrend) – During the last week, a lawsuit was filed against Alcoa Inc (NYSE:AA) by North Carolina. The bout by the North Carolina with the Alcoa Inc was a long running one. The central point of contention was the issue with regards to the controlling of both electric power as well as water that is being generated from the state’s second largest river over the period of the following five decades. Per the lawsuit that was filed by North Carolina official, there were no ownership rights being held of Alcoa Inc over the river bed. And hence, the lawsuit has requested the state court Judge of Wake County to rule that the North Carolina state in retaining the ownership rights of the whole submerged land. By this way, the lawsuit means that the North Caroline state is requested to hold the rights over a stake in the hydropower dams. Beginning over a century back, four dams have been constructed across the river, Yadkin River. These dams were made use to power the aluminum smelter of Alcoa Inc which was shut down during the year 2007. Right from this shut down, Alcoa Inc was seen selling the powers to wide range of the commercial customers.

It could be noted that one of the environment agencies of the state has denied the certification for water-quality that is required by Alcoa Inc in order to obtain a fresh license for federal operations. The reason for this rejection by the agency has been stated as the dispute with the North Carolina with regards to the property rights over river bed.

Per the statement from Pat McCrory, Governor of North Carolina, the state should be having the access to water in order to meet the water requirements prevailing in the state and it is seen as one of the major means of creating new jobs. In contrast to this, Alcoa Inc said that its operating subsidiary, Alcoa Power Generating Inc will be requesting for the movement of this case to the Federal Court wherein the merits of the case would be measured by the Judge