AK Steel Holding Corporation (NYSE:AKS) was a notable decliner during Wednesday’s trading session declining by 6% on relatively high volumes, which were 0.9 times the daily average. The stock has been underperforming the broader markets over the last several months. AK Steel has been forming lower tops and bottoms indicative of bears using every rally as a selling opportunity.The oscillators, which measure momentum, are clearly indicating that bears are in total control at the momentum. The stock trades below all daily moving averages. The index measuring relative strength has given a fresh sell signal, which is a bearish sign. Traders see the stock heading to levels of $2.10. 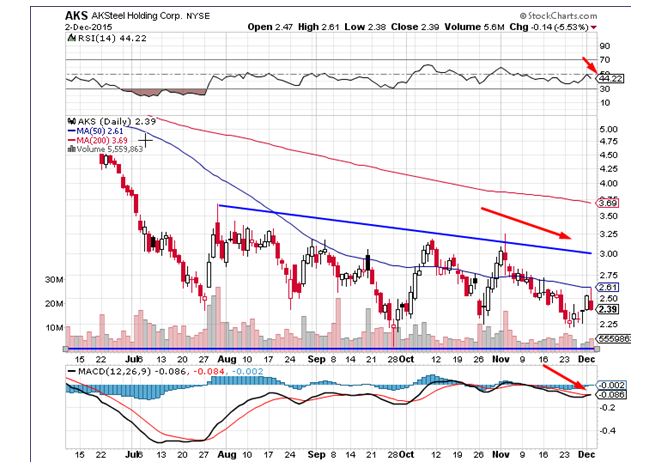 AK Steel (NYSE: AKS) has announced some major promotion at the executive level after approval from the company Board of Directors. The new promotions would come in effect from January 1, 2016. As per the company announcement Director for Finance Jaime Vasquez would assume the responsibilities as Vice President, Finance and Chief Financial Officer.

Vasquez’s boss would be EVP, Finance and CFO Roger K. Newport who will be the CEO and a Board of Directors member from January 1, 2016. Controller and Chief Accounting Officer Gregory A. Hoffbauer has been appointed as the company’s Vice President, Controller and Chief Accounting Officer and he would also be monitoring the risk management of AK Steel. Treasurer David E. Westcott would assume the role of Vice President and Treasurer and will be answerable for all Information Technology decisions of the company.

New Leadership To Help In Growth

Chairman, President and CEO James L. Wainscott confirmed the promotions and said that AK steel will benefit with the able leadership of the appointed personnel and the company will further strengthen its financial positioning.

Newport also expressed his excitement on the promotion of his colleagues to the executive level and said that he was confident that they would take the company forward to new heights.

The anti-dumping determinations will be started by the Commerce countries on December 21 and these will be added to the countervailing duties. AK Steel Holding Corporation (NYSE:AKS) and other petitioning companies have estimated the anti-dumping duties to be between 120.20 per cent to 71.09 per cent range.

According to Wainscott, unfair subsidies are there on import of corrosion-resistant steel which affect the companies. This determination by the department would ensure fair trade for the importing countries.

The Commerce Department will now take action by verifying the facts that the importers and foreign governments have submitted in their favor and only then the final determination will be made.