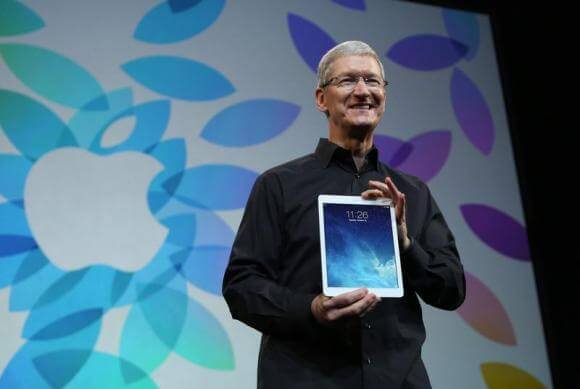 Dallas, Texas 08/29/2014 (FINANCIALSTRENDS)  – Apple Inc (NASDAQ:AAPL) has been experiencing a decline in sales for the past two quarters in a row. Already, the iPad maker, located in Cupertino, California, is looking for fresh new ways to grow from its recently finalized partnership with IBM (NYSE:IBM). According to multiple media outlets, suppliers for Apple are getting ready to manufacture the largest iPad the technology company has made yet.

Apple Inc (NASDAQ:AAPL) new iPad Pro is presumably targeting the education and enterprise markets. The iPad is the product that generates the second highest amount of revenue after the iPhone for the tech company. Apple’s stock is now trading at ever growing levels, and investors should resist the temptation to try to get too many profits because the stock still has room to grow into the product launch date, which is expected to be September 9th.

Declining sales is not all that plagues Apple. Having basically created the market segment for tablets with the iPad, other tablets by Android and Google Inc (NASDAQ:GOOG) (NASDAQ:GOOGL) have essentially taken over the lead. According to a research report by Gartner, Apple controlled about 52.8 percent of the tablet market at the end of 2012, and by the end of 2013 that figure slipped to 36 percent. This is shown by the fact that most of the growth in the tablet market was a result of smaller devices, such as the iPad mini. Additionally, the large selection of inexpensive Android tablet alternatives has expanded, and increased its control of the market along the way. By the end of 2013, Android held 62% of the market.

Roberta Cozza from Gartner explained that shift in market share. 2013 was the year that the tablet became a mainstream device, and Android took advantage of that market by offering tablets that were priced at levels within the budgets of average consumers, but still featured satisfactory qualifications. Additionally, as commoditization of the Android market grows, the main driver of sales will become user experience. In this area, Apple has gone above and beyond, and will need to stay focused on that aspect in order to retain its edge over the competition.

After Apple reached an agreement with IBM and signed the deal, Tim Cook, the CEO of Apple, stated that one of the reasons for this partnership between the two companies was to help Apple sell more products to firms and businesses. According the Mr. Cook, the success of delivering products to companies is a key factor to the iPad’s growth in the future.

Buyers of iPads who are from businesses will expect the iPad and related devices to be able to perform the same jobs that are usually done by laptops. Another key factor is the usage of iPads for presentation or display purposes, in which a larger screen will likely be more important.

Jitesh Ubrani, an analysts from IDC, stated that the company predicts that governemnts, schools, and businesses will become more substantial consumers of tablets, if Apple focuses on making larger devices. Global tablet sales have been consistently growing, but sales in the United States have seen slowing growth. This slow down in sales has found many reasons, such as a limited real potential for productivity and a somewhat long replacement cycle.

By shifting their focus to manufacturing larger devices, Apple has the ability to create the revolutionary force that is necessary to drive new sales. Timing is also important, especially given Microsoft Corporation (NASDAQ:MSFT)’s Surface Pro 3 and its slow but steady gain of foothold in the market. While there is not enough data to determine just how significant Microsoft’s boost in the tablet market is, existing reviews of the device have tooted the Surface Pro 3 as an attractive alternative that runs on Microsoft Windows, to both the tablet and the laptop. By looking for and discovering key points of differentiation and ways to make its own product superior, Apple can use its relationship with IBM most effectively and form important sales relationships.

Currently, Apple Inc (NASDAQ:AAPL) has an overall consensus Buy rating from numerous financial analyst firms, with a score of 2.69. Out of the 45 firms that announced ratings for the maker of the iPad, 33 analysts gave the company’s stock a Buy rating. On the other hand, 2 firms rated Apple as Sell, and 10 analysts rated the company as Hold. Overall, the consensus price target is $101.43, and a downside of 0.8 percent.

For the company’s second quarter, multiple analysts and firms weighed in on Apple’s stock.

Nomura reiterated its previous Hold rating, and set a price target of $95.00 for the company.

Both Raymond James and Macquarie boosted their ratings for Apple to Outperform, setting the price target to be between $102 and $104 and between $95 and $102 respectively.

JMP Securities upgraded their rating for the stock from Market Perform to Outperform, and announced a price target of $135 for the technology company’s stock.

Citigroup initiated coverage of Apple’s stock, giving it a Buy rating and setting the price target at $110.

Credit Suisse boosted its price target by $10.29 from $85.71 to $96, but maintained its Neutral rating for the iPad maker’s stock.

Robert W. Baird maintained its previous rating of Outperform for Apple’s stock, but increased its price target by $6.43 from $88.57 to $95.

The big question is Apple Inc (NASDAQ:AAPL) launching the new iPad Pro on September 9th, 2014 or are they launching the all new iPhone on 6 9.9.14.