Apple Inc. (NASDAQ:AAPL) was a notable decliner during Wednesday’s trading session declining by 1% on relatively high volumes, which were 0.9 times the daily average. The stock has been lacking direction and trending sideways. Apple currently trades below its 200 day moving average, which is considered to be a bearish sign. Traders believe if the stock is able to breach $115, it could slide towards levels of $110.80 in the near term. The index, which measures relative strength, has formed a lower high, indicative of the strong bearish presence at current levels. The MACD oscillator has given a sell signal. 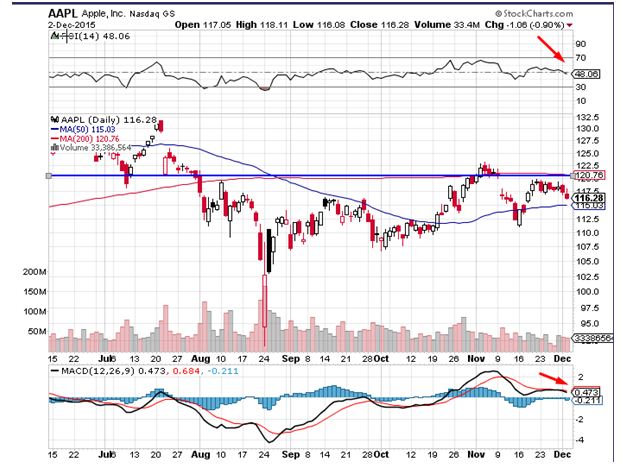 There have been numerous articles stating that Apple Inc. (NASDAQ:AAPL) might be considering peer-to-peer payment services for Apple Pay.

Although the company has not confirmed whether a peer-to-peer option is in the makings, it would be highly advantageous to both the company and users if it was introduced. Peer-to-peer payments have proved to be advantageous for payment companies such as PayPal Holdings Inc (NASDAQ:PYPL) by making it easier for people to transfer funds to other individuals.

Such an option would be ideal in instances where people need to send money to others without having to go through the lengthy processes in other forms of payments. In short, peer-to-peer payments would bring more convenience on board, thus attracting more users. Since the launch of Apple Pay, the service has seen numerous expansions as part of the company’s plan to expand to a global scale.

Unfortunately, people have not fully embraced mobile payments and have been relatively shy about using it. According to a research firm known as Info Scout, Apple Pay was not popular with Black Friday sales. Analysts claim that users are not fully convinced about the security of Apple Pay.

Another concern that Apple might with the introduction of peer-to-peer payments is the costs implications. According to Richard Crone, the CEO of Crone Consulting, if Apple will not charge users for transactions, it could end up costing the company up to $3 per transaction. He further added that the service would provide a self-funded initiative that would encourage more sign-ups on the service.

Another Analyst known as Julie Ask from Forrester suggests that peer-to-peer payments would encourage more merchants to accept Apple Pay. The network effect would then push the payment service towards more growth. Such a move would provide additional financial benefit to the company in terms of the credit card and debit card transaction earnings.

There is still a lot of ground for Apple to cover through its payment service and the mobile payments industry is still young. Once the service is expanded on a global scale, more people will get on board, and if the company introduces the peer-to-peer service, it will enhance its margins.