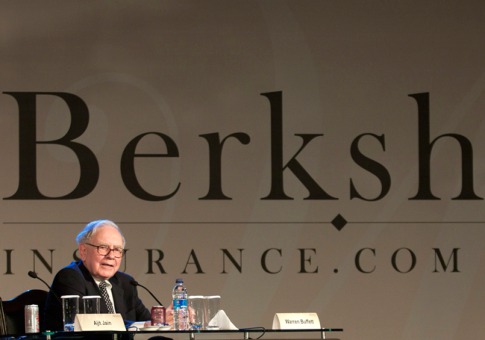 Berkshire Hathaway Inc. reported that the Warren Buffett owned company recorded a growth of 49% in its 4th-quarter profit due to gains from derivatives wagers made by the billionaire CEO and Chairman.

Berkshire’s net come rose from around $3 billion or $1,846 per share a year ago to above $4.5 billion or $2,757 per share this year. Gains from derivates increased to $1.4 billion compared to a figure around $160 million last year.

Buffet makes use of index-based options for speculating long-term profits in stock market indexes in Europe, U.S. and Japan. Such bets helped him generate $2 billion out of Berkshire’s profits during the 4th quarter before taxes.

According to Professor David Kass of the Robert H. Smith School of Business, Maryland University, the chances that that Berkshire would ever make any loss on such contracts are extremely low.

The Class A shares of Berkshire rose 29% last year on the head of Buffett striking deals for buying back stock and taking over HJ Heinz Co. This is equivalent to the 10% advance recorded on S&P’s 500 Index.

These equity index contracts are linked with 4 stock indexes – the Nikkei 225 that rose 17% and the S&P’s 500 that fell 1%. Whenever, there is gain in benchmarks, liabilities slim down, and fluctuations get recorded every quarter in the income statement of the company. Buffett made $67 million in profits on credit-default contracts.

The billionaire built the company over half a century through stock picks and takeovers, and today it is valued at over $250 billion. Berkshire consists of over 70 units engaged in power generation, freight hauling, making building supplies and selling products ranging from chocolate to insurance.

Buffett is known for the strange way he works. While his managers make decisions for running the business on a daily basis, he saves all the time for himself to invest. This method of working has helped him to build up the largest equity holdings in businesses like Coca-Cola Co., Well Fargo & Co., and IBM Corp.

Berkshire reported that its cash volume has come down to $47 billion at the end of December against $47.8 billion 3 months ago.

The largest takeover for the company was the Burlington Northern Santa Fe railroad that was worth over a $26-billion deal. As compared to the previous-year quarterly earnings of $909 million, the company made $932 million. The drop in coal shipments was covered by the growth in petroleum and construction products shipments.