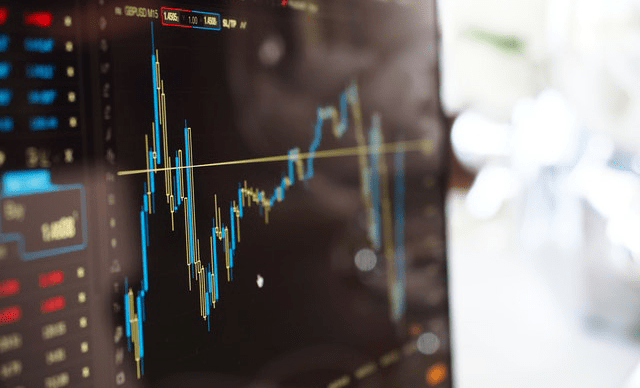 In the past decade, high-tech stocks have generated fortunes for investors. Facebook’s (NASDAQ:FB) IPO reportedly created 1,000 millionaires from its employees alone and its stock has since appreciated more than 200%. Mobile messaging apps such as WeChat are currently among the hottest of Wall Street darlings; Tencent, owners of WeChat, now commands a jaw-dropping $106.2B valuation.

Investors looking for an opportunity in this space know the ship has sailed for these juggernauts… the real trick is uncovering the next one BEFORE the investing masses. Small-caps are consistently the biggest winners, often producing triple or even quadruple-digit gains overnight, as they get bought up by giants in need of boosting user growth to justify their sky-high stock prices.

One of the most innovative start-up companies in the tech space, Hello Pal Intl. (OTC:HLLPF / CSE:HP) is only now starting to get investors’ attention.

HLLPF may not be on your radar, but this undervalued company has built an active base of more than 2 million users… 100% by word of mouth.

Organic growth is king when it comes to the hyper-competitive mobile environment. And Hello Pal certainly doesn’t disappoint, with an impressive 8,000 to 10,000 new signups daily across more than 150 countries worldwide. 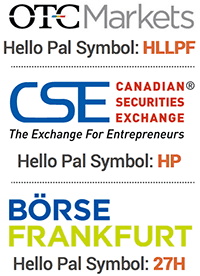 You’re probably wondering how a company could achieve this kind of massive growth without spending a cent on marketing? That’s simple: HLLPF offers its users what no other social messaging app has before, the ability to bridge the language barrier in real-time. For the first time, Hello Pal’s flagship meet-up and language-learning app allows users from around the globe to seamlessly connect and converse in foreign languages using their own voice.

Hello Pal (OTC:HLLPF / CSE:HP) is off to a running start, and that bodes extremely well for early shareholders. Check out their news, it’s nothing but progress…

On September 21, Hello Pal announced the successful launch of its first major companion-app – Travel Pal. Travel Pal is designed to target the global travel sector by encouraging ‘social traveling’ among its users; where traveling can become much more social through the interaction with locals, as well as with other travelers going to the same destination. Hello Pal considers itself a pioneer in the travel app space following successful travel disruption start-ups, such as Airbnb.

This is BIG NEWS to the social media landscape which has faced crippling limitations in past attempts to expand to a global audience.

Such an innovation could place HLLPF squarely in takeover target status amongst social media companies worldwide, who would be drooling to acquire their “real-time” translation algorithm, and their loyal 2 million+ members.

App-monetization is next on-tap for Hello Pal, which – coupled with the company’s massive user-base growth – could signal a fast rise in HLLPF/HP share value. Immediate revenue verticals include VIP memberships, in-app advertising and purchases, as well as targeted sponsorships. The company’s ad-delivery platform has already been seamlessly built into the Hello Pal and Travel Pal apps – which spells cash flow for Hello Pal and VERY HIGH potential returns for savvy shareholders.

Momentum is building on all fronts; right now could be that proverbial sweet-spot – right at the onset of multiple app monetization – for well-informed investors to climb aboard the Hello Pal Intl. (OTC:HLLPF) (CSE:HP) freight train just before the next projected upsurge in value. 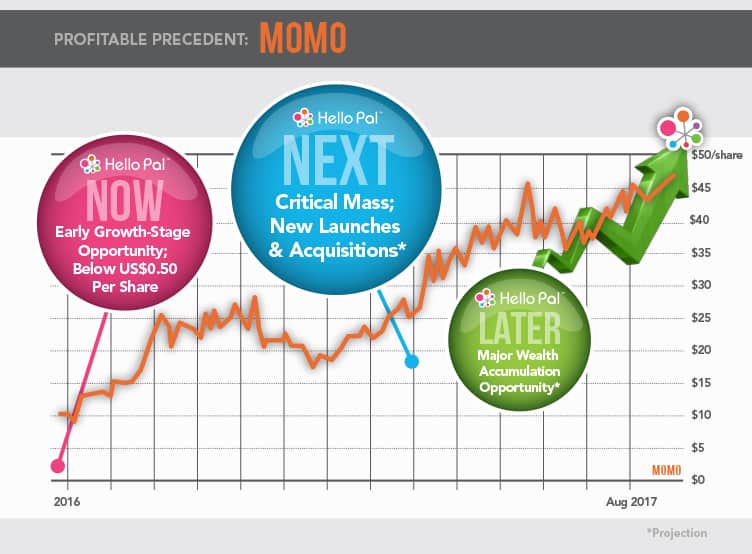 Let’s face it, Millennials are consumed with mobile-based social interaction in what can only be described as a burgeoning ‘global village’ trend. In fact, interactions on mobile messaging apps such as WhatsApp, WeChat, and MOMO have quickly eclipsed interactions on traditional social media sites such as Facebook.

One needn’t look any further than Chinese social messaging app, MOMO’s sharp climb to $45 a share and $7.3B market cap to understand the tremendous stock opportunity Hello Pal presents to foresighted investors.

MOMO, which boasts 78 million monthly active users, listed its shares on the NASDAQ in December 2014 via a very well received IPO. Early backer Alibaba (BABA: NYSE; $450B Market-Cap) led a $216M post IPO private placement in the company, adding $50M of the round to their MOMO stock position. Fast-forward a couple years to today…and MOMO shares are now in full-blown rally mode as investors, along with Wall Street’s big banks, continue to place their bet on mobile-technology stocks.

Quite telling is the fact that, despite a doubling of MOMO’s post-IPO value, Alibaba has yet to unload any of its MOMO stock. Clearly, Alibaba has no intention of cashing its chips in early.

MOMO generates revenue through the sale of premium memberships and in-app purchases—a time-tested monetization model and one that Hello Pal will be rolling out in the immediate-term. Coming in on the back of a proven business model, Hello Pal is uniquely positioned to leverage the social media megatrend on a truly transcultural level..

The end result: a growing userbase of ambitious young people with a sense of adventure and, oftentimes, ample disposable income to spend on VIP memberships and in-app goodies.

POWERFUL FINANCIAL BACKING: From one of China’s Largest Investment Funds

Hello Pal’s string of early successes is attracting some extraordinarily deep-pocketed players from the global financial arena. Hans Xu, a key managing partner at NewMargin Ventures and Special Advisor to Hello Pal, recently became one of Hello Pal’s largest shareholders. NewMargin is China’s third largest venture capital fund with over $3B under management. 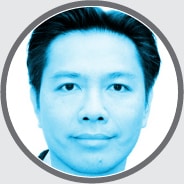 KL Wong is the visionary behind Hello Pal. Following a successful technology launch into the early education marketplace, Wong witnessed a strong demand for language learning apps that could be powered via the same platform that’s currently fueling the mobile-messaging app revolution and immediately began developing Hello Pal. Two million-plus users later, and growing fast, Wong is now preparing the launch of the company’s ﬁrst companion app, Travel Pal. Move over Rosetta Stone and Airbnb: KL Wong is ‘bringing the fun’ back to language learning and social travel. 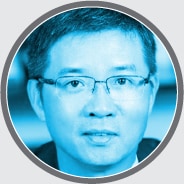 Hans Xu is a key managing partner of NewMargin Ventures—China’s third largest venture capital fund with over $3B under management. Xu serves as a Special Advisor to Hello Pal and is the company’s second largest shareholder. NewMargin – which has invested over $1.7B in more than 160 companies worldwide – is also a signiﬁcant stakeholder in Hello Pal. Xu is a prominent and well-connected investor with a highly successful track record whose expertise should prove instrumental to Hello Pal’s robust growth and acquisition initiatives going forward.

Xu’s distinguished investment track record and vast network of contacts throughout the tech and entertainment world should prove invaluable to Hello Pal’s (OTC:HLLPF) (CSE:HP) growth initiatives. And yes, NewMargin, which boasts a broad portfolio of highly successful technology, mobile and internet based investments, also holds a significant stake in the Hello Pal venture.

Based on the credibility and integrity the Xu/NewMargin unit brings, the company has gone on to launch successfully on the U.S. OTC Markets, the Canadian Stock Exchange, and the Frankfurt Stock Exchange. With former Softbank president KL Wong at the helm, HLLPF/HP is riding a wave of momentum—recently completing an oversubscribed financing for gross proceeds of $1.8M.

Stronger than anticipated demand for Hello Pal shares elevated the financing well above its originally planned cap of an even $1M and portends great things to come for the company’s upcoming business quarters. This was followed by a secondary $1.2M financing completed in July.

The future looks exceptionally bright for Hello Pal Intl. (OTC:HLLPF) (CSE:HP) and as well for astute investors with the foresight and moxie to jump in at this early-momentum stage.

In addition to the company’s lightning-fast start in the North American and Asian markets, Hello Pal’s management team holds a bevy of invaluable international relationships – not to mention the financial backing of a $3B venture capital fund – which the company plans to leverage so as to realize market penetration throughout Europe, Central and South America, Australia—and beyond.