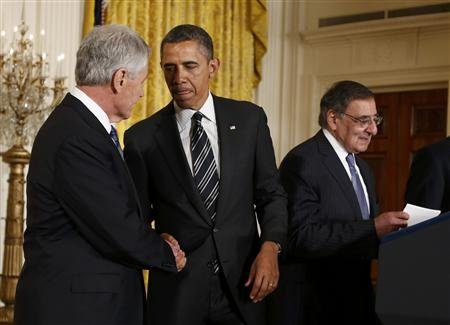 Neoconservatives and Israel supporting groups are now confronting the American president Obama after he announced that the leading candidate for the secretary of defense might be the ex-senator Chuck Hagel. On the other hand, Obama has shown no signs of letting go of Hagel even after various American Jewish organizations and leaders have complained about this move. The anger towards this move was even more noticeable during the Hanukkah party that took place in the white house last week. It is now becoming clearer that President Obama has to fight if he wanted to go ahead with the decision of nominating Chuck Hagel. The White House is currently in the process of preparing for major realignments for the president’s security team towards the end of next week. However, there is a high possibility that the final announcement might be delayed due to the negotiations about “fiscal cliff” with the Republican Party in the congress. This will definitely provide critics of this move with more time to raise opposition whether it is in the public or behind closed doors.

President Obama has recently faced a lot of questions from the Jewish leaders regarding his political approach towards the alliance between the United States and Israel. There were also several reports that the relationship between President Obama and the Israeli Prime Minister Netanyahu is very strained right now.

“This nomination is very toxic to the White House especially during this time,” a Senate in the Republican Party said. “Does the President really this to happen during his second term?”

Hagel has sparked anger among the Jewish community because he opposed the interested of Israel several times especially when he voted against the Iran sanctions and made several disparaging comments about the Israel influence on American politics. After leaving his office, Hagel also urged Obama several times to negotiate with Hamas, Israel’s number one enemy. Jewish leaders believe that select Hagel is the worst decision that Obama will make. Many members of the Israeli community in the United States feel that Hagel will completely change the way that Obama perceives the conflict between the Israelis and Palestinians.

Even though the president is aware of the backlash, he still respects and Senator Hagel and believes that he is the best choice. They have travelled to Middle East together during the President’s campaign during 2008. On the other hand, Hagel has remained quiet about this and has made no comment yet.