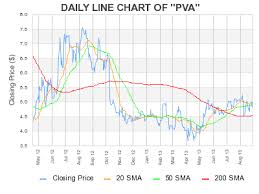 Dallas, Texas 01/03/2014 (FINANCIALSTRENDS) – Penn Virginia Corporation (NYSE:PVA) is an $601 million market capped oil and gas producer which is engaged in the production of oil and natural gas liquids from its various properties spread across off shore and on shore properties in U.S. Its primary holdings are spread across Texas and Mississippi and boasts of proven reserves in the range of 113 million barrels of oil per say. In the past 12 months, the company has managed to post sales of $393 million and has accumulated net loss of $202 million in the same time period.

The recent weakness in the stock gathered steam when it became know that the oil firm has contracted to shed some of its prime assets. In its decision which became public on December 16, the company disclosed that it will sell off its most coveted oil field holdings in the promising Eagle Ford Shale natural gas fields to a newly incorporated investment firm ArcLight Capital Partners LLC.

From this sale, Penn Virginia Corporation (NYSE:PVA) expects to raise close to $100 million of which it plans to plough in close to $95 million into its cap ex slated for 2014 operations. The reminder $5 million is expected to be used for paying dues that it owes to a partner firm.

Readers should note that investors in the stock would be made aware of further such sell off decisions as and when Penn Virginia Corporation (NYSE:PVA) management identify suitors for more of its properties.