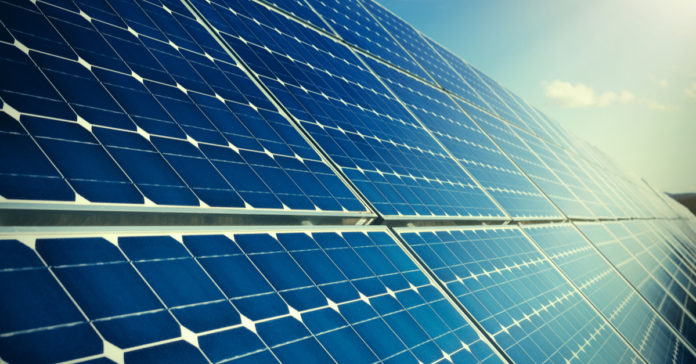 Do not buy any solar energy stock
until you’ve read this report to the end.

We’ll tell you where the heat is building in
solar energy this year and why it’s
not where Wall Street is steering you now.

It may only take five minutes of your time to read to the end of this report, but be assured, you’ll come away with an entirely new outlook on the solar energy industry, where the best investment opportunities may lie, and how you can play its potential over the coming months to position yourself for significant growth.

Here’s what you need to know to get in first…

Like it or not, California can trigger massive changes in American markets. This one is a blockbuster.

Starting in just a few weeks, 115,000 new single-dwelling homes built each year in the state will be outfitted with rooftop solar panels.[1] At an average cost of $9,500 per installation, this one change will pour an additional $1.08 billion annually into the state’s residential solar marketplace. That adds up to more $10 billion for the decade!

Investors Business Daily reported that by mid-year the impact this news had on mid-cap and large-cap solar shares was tepid at best. For example, the top ranked Invesco Solar ETF (TAN) fund simply returned to its 2016 trading levels after precipitous 25% losses over the last three years.[2]

IBD also noted that many top tier solar stocks in that ETF had a terrible runs, stating that “where half the 15 companies are at least 24% off prior highs” and that leading solar panel maker is“…recovering from a major decline since late October and remains more than 20% below its 52-week high.”

This should come as no surprise; the entire solar sector “caught fire” over a decade ago and has been smoldering ever since. Up and down. Up and down with no clear trend line forming.

Competition among panel producers has been fierce. Solar panel prices have been plummeting, a direct result of rapidly evolving technology improvements mixed with soaring production capacity.

That’s good for consumers (and for installers, which will be discussed in a moment), but not so good for panel manufacturers. To stay afloat, these companies are forced to sell more units at lower prices just to maintain stable revenue. It’s tough to build shareholder value in this environment.

However, there is a side of this business poised for major growth…and that brings us back to California.

We forecast that over the next five years, the opportunity in residential solar will be on the installation side, not the production side.

Our analysis confirms its potential.

A billion dollars in incremental money is about to pour into California’s soaring residential solar marketplace. The state has greater penetration of residential solar installations (7.2% as of 2016) than any other in the Union. That’s just shy of 500,000 homes now equipped with solar power.[3]

For comparison, the next highest penetration is in Arizona with 5.8% residential solar installations. But because of its much lower population, that calculates to just 82,300 homes, slightly less than 17% California’s installed base![4]

No question, California is the place to be!

There’s robust growth in residential solar already. 115,000 new solar installations are being added to the market starting at the turn of the year. That adds a 20% increased growth rate to the state’s residential solar market.

Nationwide, in 2016 the annual organic growth rate of residential solar as steadily climbing at about 9% annually.[5] Assuming that rate held through 2019 (a minor quibble to this point) that projects to about 45,000 houses in California annually going solar through 2019.

And that pace of growth should continue for many years to come. Assuming that all new and existing homes go solar (which is the only practical option at present) that projects to a 1,300% growth capacity in California’s rooftop solar installation market!

Better stated in dollars, under existing legislation a net of approximately 6.4 million California homes stand ready for rooftop solar installations, which at today’s prices projects to a whopping $60.8 billion market.

Start with the basics. Virtually all residential solar installations will be rooftop mounted. But you can’t just drag a solar panel onto a roof and nail it in place. It’s a complicated installation that the average roofing company simply cannot pull off. Just avoiding roof damage is complicated enough. Add in the complexity of an electrical interface, wiring and sizing of solar panels requires highly specialized skills.

What to do next…

The California rooftop solar energy industry is poised for outsized gains beginning the first of the year. We recommend you do the following:

I am raw html block.
Click edit button to change this html