Tuesday Morning Corporation (NASDAQ:TUES) was a massive decliner during Monday’s trading session. The stock collapsed by close to 5% on high volumes, which were 1 times the daily average.. The stock has formed a bearish engulfing pattern on the daily charts indicative of the strong sell-side momentum at the current moment. The stock currently trades below its 200-day moving average. The indicator for relative strength has given a fresh sell signal indicative of lack of strength. The MACD oscillator has given a sell signal, which is considered to be bearish. Investors believe the stock could head to levels of $6.15 in the near term. 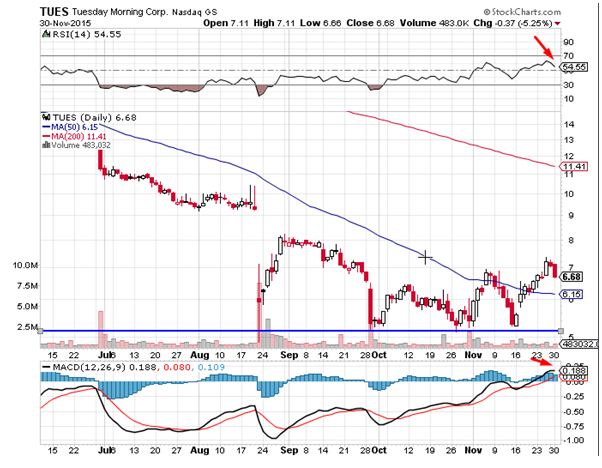 Tuesday Morning Corporation (NASDAQ:TUES) announced financial results for the recently concluded first quarter fiscal 2016. As per the reports, the biggest highlight of these results was the record $202.3 million in sales revenues.

Tuesday Morning is one of the leading off-price retailers in the country with over 750 stores across U.S. It sells hugely discounted, high-end decorative housewares, home accessories, famous-maker gifts, and seasonal goods.

Tuesday Morning ended the quarter with 757 stores, 44 less than the stores during the same time in 2014. Amid improved market position, its comparable store sales increased as much as 3.6 percent. During the quarter, it primarily focused on the expansion of operations, which somehow didn’t work, and led to an operational loss of $6 million.

The senior management team of the company hopes that as the time progresses, Tuesday Morning’s performance will also improve. According to Steve Becker, Executive Chairman, company’s strategic initiatives paid off during the September quarter. Although the situation isn’t that bad, Tuesday Morning can’t overlook the scope of improvement across all the business segments.

Around 34 stores of Tuesday Morning Corporation (NASDAQ:TUES) were relocated during the past one year or so. The sales at these relocated stores increased as much as 56% during the first quarter of FY16. Company’s gross profit for the quarter was $72.7 million, and gross margin was 35.6 percent.

Selling, general and administrative expenses increased to $78.6 million during the quarter. The factors contributed to this increment included the high cost of Phoenix distribution center, occupancy related cost, increased store rent, higher legal and professional fees, etc. At the end of the quarter, it had about $23.3 million in cash with zero borrowings under LOC.

The senior officials of the company are confident that these number will continue to improve in the upcoming quarters. Further announcements and updates regarding its future initiatives will be shared with all the shareholders from time to time.