Investors looking for new opportunities in the equities markets would do well to take note of ADM Endeavors Inc. (OTC:ADMQ), a custom B2B and retail goods player that has been capitalizing on recent accelerating technology trends in the retail space to grow its presence in the marketing and retail goods industry, with a strong E-Commerce identity already in place.

COVID-19 has reshaped the world in so many ways. One of the most prominent is the B2B small business economy. Everything in the space is turning to virtual and automated functionality. At the same time, brand-building is increasingly shifting toward product merchandise, something that ADMQ has anticipated in its core strategic objectives.

Shares of the stock have been advancing over the past two months, rising over 250%, as the Company nails down a wider exposure profile through expanded marketing reach, strong new catalysts, and robust sales growth, with over $4 million in trailing 12-month sales.

ADMQ has also become a key potential player on the need for personal protection equipment in response to the COVID-19 pandemic global health crisis as it offers personalized face masks that allow individuals to meet local regulations and protect themselves and their families while expressing custom style with personalized graphics. 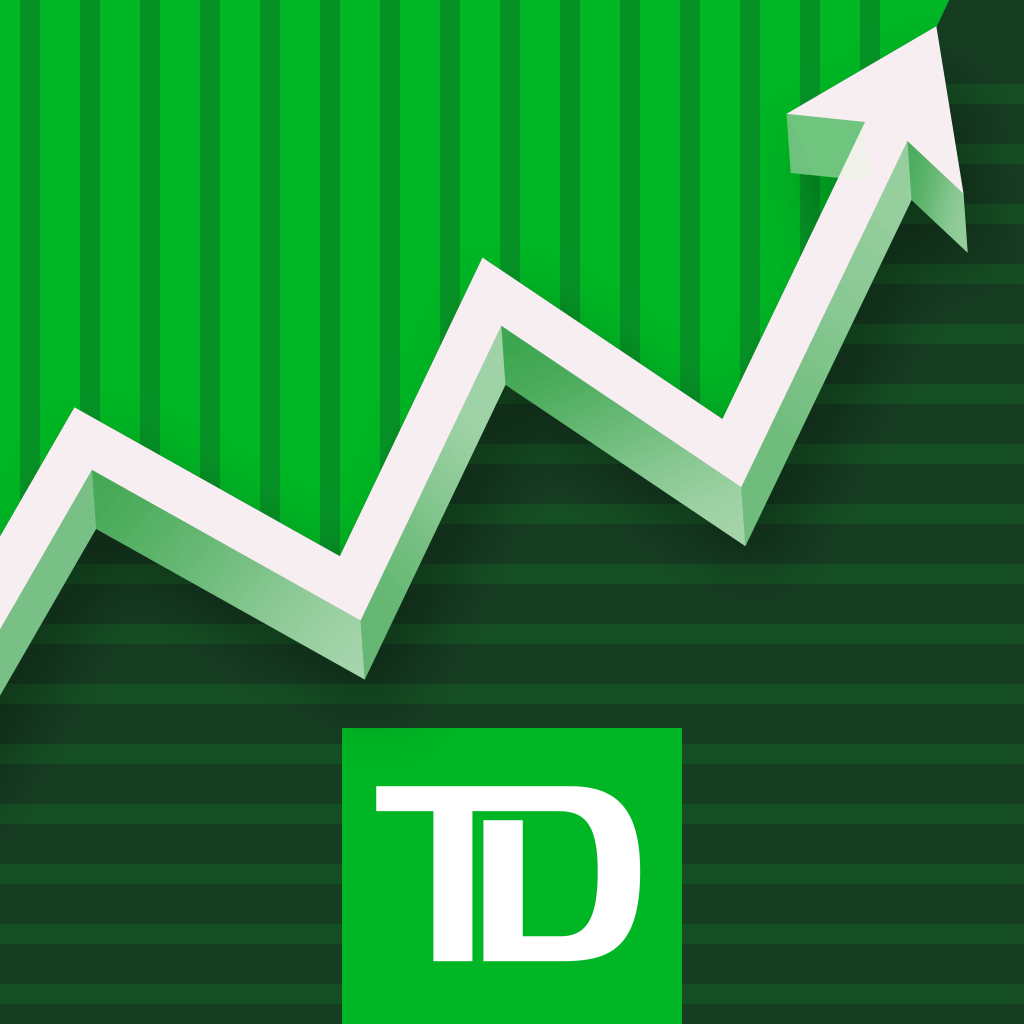 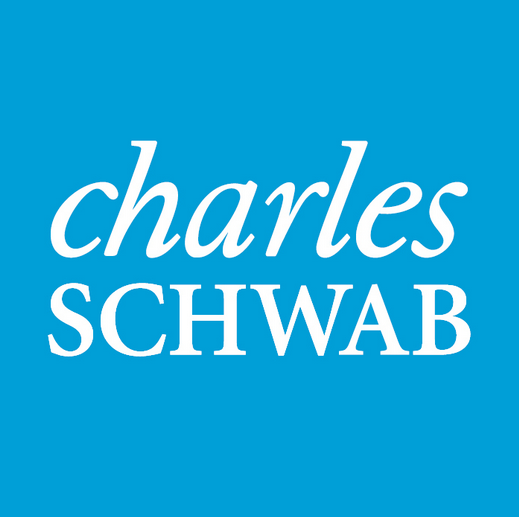 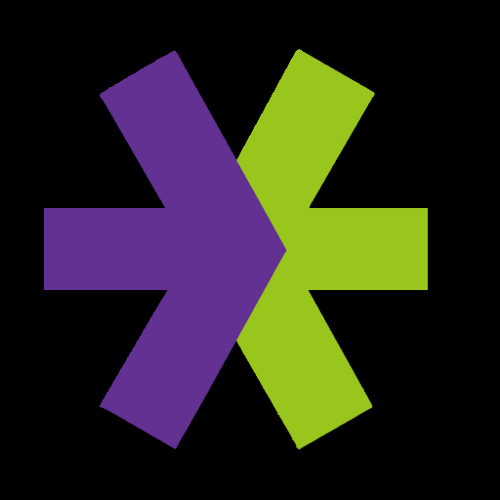 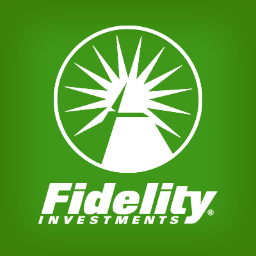 The Retail Sales Division focuses on “any product with a logo.” It sells a wide range of products from business cards to coffee cups. Since the Company’s motto is “We Sell Anything with A Logo!” — Just Right Products has salespeople who excel because they are selling the items people like to buy.

The Screen Printing Department utilizes its five screen printing machines to print garments and can produce more than 8,000 units per day. The Embroidery Department has equipment with 51 heads of embroidery capacity. The Digital Department and all other decoration departments have significant growth potential. The Import Department sources products for both retail and wholesale customers. 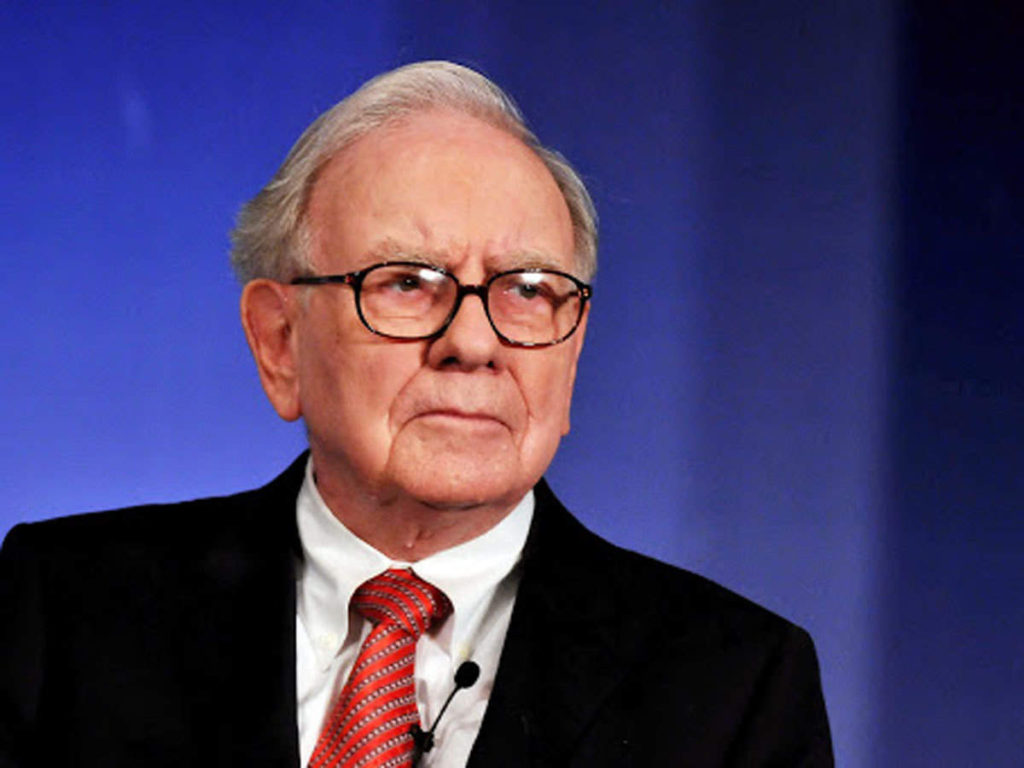 Invest in companies you believe in.

ADM Endeavors has employees fluent in Chinese, Spanish, and Arabic thereby affording significant opportunities to interact directly with multiple product sources internationally. The Uniform Division sells uniforms to businesses and schools, with the advantage of in-house production and international sourcing.

The Company’s lead is Marc Johnson, ADMQ’s Chairman, CEO, and CFO. Mr. Johnson has been in the Promotional Products Industry for more than 35 years, starting his first promotional business in high school. It’s an industry he loves and has been very successful with maintaining. In 2010, Mr. Johnson started Just Right Products, Inc. (www.justrightproducts.com)

Since then he has attracted a solid customer base as well as an excellent staff to increase sales from 10 to 30% annually. Mr. Johnson earned his Business Administration Degree from Texas Christian University in Fort Worth, Texas.

We would also note that Mr. Johnson has been aggressively buying ADMQ common and preferred stock over the past two years, acquiring over 30% of the common stock and 100% of the preferred stock. This clearly demonstrates his faith in the Company and in his own ability to drive growth over coming years.

The Company most recently announced that it is now offering advertising and marketing services for its customers, allowing it to assist customer growth, which should also augment the revenue base of the company over time.

The Company share price reflects the fundamental value of the Company, provide financial information to investors, both retail and institutional, in a timely and accurate way, observe the rules of the SEC through non-aggressive awareness promotions, and build receptive capital markets for future financing at favorable terms.

Before that, the Company announced that ten additional governmental entities have “piggybacked” onto its existing Tarrant County, Texas Work Uniform Contract within the last week, adding potential new revenue of approximately $5,000 each annually.

“Our efforts to expand government customers are continuing to pay dividends for ADMQ and its Shareholders,” said CEO Johnson. New customers include a high school band, a health center, and elementary and middle schools.

Mr. Johnson explained that, because of the one-year uniform contract with Tarrant County, Texas which commenced on July 1, 2020, the Company is now on a bid list for an additional 525 government entities throughout the State of Texas, all of which can participate under this contract and “piggyback” onto the pricing provided by the Company in this contract. This additional “piggyback” feature involved in winning the award provides the Company with a significant opportunity for increased revenue.

Derek Tillemans, an Advisory Board Member of the Dallas-Fort Worth chapter of United Heroes League, said, ”The support provided by this protective mask donation is greatly appreciated and will benefit our mission of helping to give military families the opportunity to participate in sports. Our Nationwide organization strives to recognize those who serve and sacrifice for our Country. We have helped thousands over the past 10 years. Partners like ADM Endeavors, Inc. assist in growing our capabilities in Texas.”

Grab The Bull By The Horns! 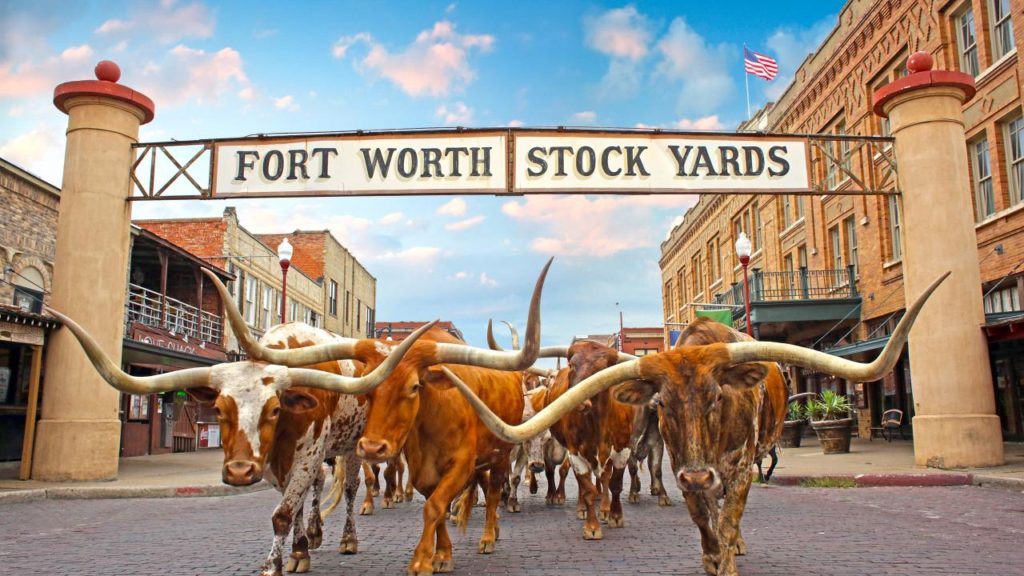 ADMQ shares have been rallying over recent weeks after forming a basing pattern in late July from which the stock took off. At this point, we have seen strong gains as key catalysts build, taking the stock up as much as 400% into its late August highs.

In the past two weeks, we have seen resistance and a pullback, triggering key support at the 50-day MA as well as the 61.8% Fibonacci support level.

That could offer new market participants a potential opportunity as the stock holds key technical supports and growth catalysts mount. 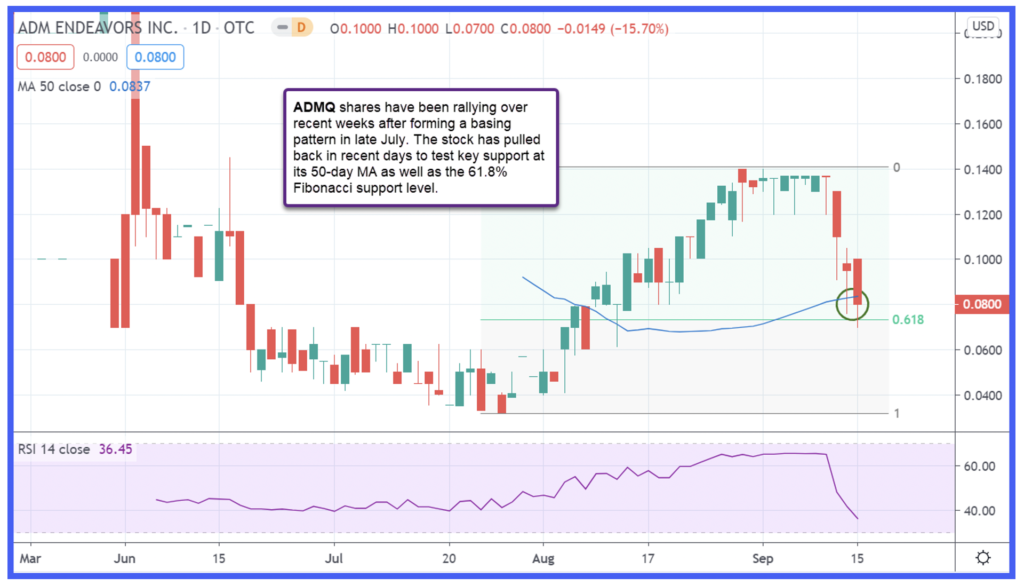 B2B E-Commerce is at the front of the class right now, especially if it plays into branded personal protection equipment ahead of an anticipated second-wave breakout as we approach this fall’s onset of the cold and flu season.

ADMQ has been racking up financial performance for years, with strong and steady growth, including over 20% on a sequential basis on the company’s most recent q/q data. We draw extra comfort from the fact that the company’s top leader is also apparently its biggest capital supporter, racking up a controlling stake in preferred shares and nearly a third of the company’s common stock over the past two years.

This is no fly-by-night company trying to grab some spotlight on the COVID-19 headlines. This is a company pulling in millions in sales with popular PPE product going out the door already.

This report is for information purposes only and is neither a solicitation or recommendation to buy nor an offer to sell securities. Financials Trend is not-a-registered-investment-advisor. Financials Trend is not a broker-dealer. Information, opinions, and analysis contained herein are based on sources believed to be reliable, but no representation, expressed or implied, is made as to its accuracy, completeness or correctness. The opinions contained herein reflect our current judgment and are subject to change without notice. Financials Trend accepts no liability for any losses arising from an investor’s reliance on the use of this material. Financials Trend has been compensated 25k for coverage of this stock by ADM Endeavors Inc. this month. Financials Trend and its affiliates or officers currently hold no shares of this stock. Financials Trend and its affiliates or officers will purchase and sell shares of common stock of these stocks, in the open market at any time without notice. Financials Trend will not update its purchases and sales of these stocks in any future postings on Financials Trend’s websites. Certain information included herein is forward-looking within the context of the Private Securities Litigation Reform Act of 1995, including, but not limited to, statements concerning manufacturing, marketing, growth, and expansion. The words “may”, “would,” “will,” “expect,” “estimate,” “anticipate,” “believe,” “intend,” ” project,” and similar expressions and variations thereof are intended to identify forward-looking statements. Such forward-looking information involves important risks and uncertainties that could affect actual results and cause them to differ materially from expectations expressed herein. *Financials Trend does not set price targets on securities. Never invest into a stock discussed on this web site or in this email alert unless you can afford to lose your entire investment. 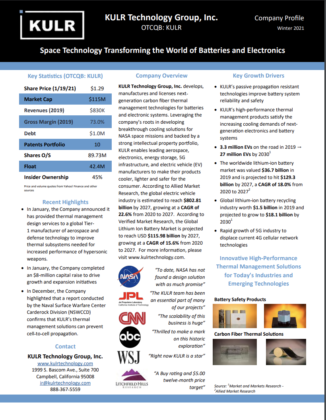