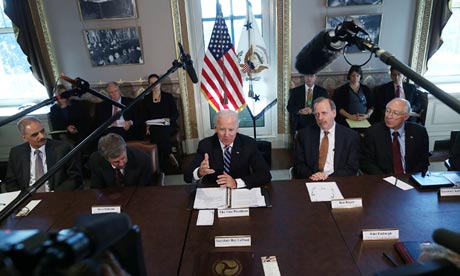 Today Joe Biden, the Vice President of US, told media that he will deliver his recommendations for preventing gun violations to Mr. Barack Obama by Tuesday. The recommendations may contain a large set of legislations, but main focus will be on performing universal background checks for persons buying guns.  Another thing of major focus may be some sort of ban on the purchase and usage of high-capacity weapons.

According to Mr. Biden, he has consulted with many important people for creating his list of recommendations. According to him this is a severe problem and there is not a single answer for this. He thinks that multiple people can provide better suggestions on these laws. So he invited many VIPs on meetings and consulted them for the list. So far he has talked with popular advocates, representatives of hunting groups, representatives of sportsmen groups, governors of both parties, legislatures of other states and other local leaders. Today he had the most important meeting regarding this list of recommendations, because today’s meeting was with some groups of gun-owners and a representative of National Rifle Association.

However, Mr. Biden did not tell whether he has included the renewal of assault weapons ban (that was expired in 2004) in the list of his recommendations or not.

According to Mr. Biden, White House Officials including President Obama are also eager to listen from him on this topic. However, his recommendations will not immediately convert into laws. Using them, when to use them, modifying them or even declining them will be totally over President Obama. That’s why they are being said “recommendations.” But of course, they will become the first step of solving this complicated problem. It is notable that gun violations and high-profile shooting activities are increasing rapidly in US. Recently 20 students were killed in Newtown due to a mass shooting activity and some other high-profile shooting cases also came ahead in 2012.