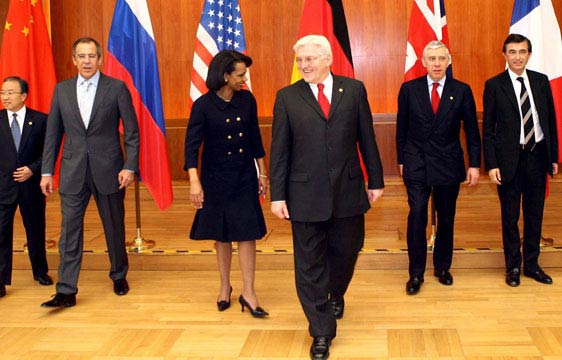 Who possesses what kind of arms and when they acquired them is standard intelligence of the kind relating to weapons of mass destruction, or nuclear weapons. For international peace to ensue, governments must be open about their efforts and collaborate with one another in order to keep the peace and unite against any countries threatening that peace. It seems a situation has developed in Iran, escalating to the insinuation of force, but not actual force, about its attempts to attain a nuclear weapon. Iran last week announced its advancement of a uranium enrichment process, necessary to develop nuclear weapons.

Yet negotiations with Iran concerning nuclear weaponry become increasingly complex, under the influence of six countries that possess active nuclear weapons. Without deciding which path to take in its journey to functional nuclear missiles, Iran is in between two nuclear peace talk offers; one from the six countries mentioned, and one from the United States exclusively. Iran has supposedly been ‘dragging its feet’ concerning talks with the six nuclear-capable countries (the United States, Russia, Germany, India, China, France and Britain), according to the EU spokesperson responsible for coordinating efforts for the diplomatic talks.

However, Iran tells a different story, claiming that the country is open to the peace talks and even sees the negotiations in a positive light. Vice President Joe Biden was the latest official to make headway with Iran, as his offer for diplomatic talks exclusively between Tehran and Washington seem to give Iran a chance to see how open to the negotiations they truly are. This proposed conference would entail Iranian compliance with international rules and regulations and treaties, or even the halting of its nuclear program all together. It may be the best way for the country, however, since Israel has recently made it clear that it would not hesitate to attack Iran if the situation was not reversed (Iran not getting a nuclear weapon) and the Joint Chiefs of Staff of the United States have indicated the U.S. wouldn’t be adverse to using force on Iran, either. This offer of diplomacy, though, will be followed through fully (according to officials) until all diplomatic resources are exhausted, and only then will aggressive action be contemplated by the United States.

It seems that Iran might not trust the United States enough to seriously consider such an offer, as comments have been made about holding up the other end of the deal by Iranian officials. The right of Iran to defend itself has come into conflict with the right of citizens all over the world to remain safe, without the threat of nuclear attack from abroad. The war in the Middle East is far from quelled, as this new development makes painfully obvious; it seems diplomacy has a long way to go.