Great Basin Scientific Inc (NASDAQ:GBSN) was a massive mover during Friday’s trading session. The stock surged by close to 18% on the back of 2 times the average volumes. It is important to state that the stock has been in a strong downtrend and has underperformed the broader indices. The stock is seeing some form of buying interest after forming a base near $0.05, which is a huge positive. The stock has been able to move above its 50 day moving average considered to be a bullish sign. The relative strength index has given a buy signal indicative of the inherent strength. 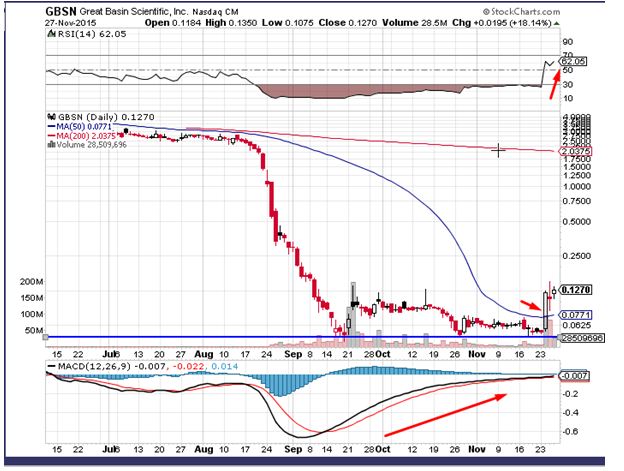 Great Basin Scientific Inc (NASDAQ:GBSN) has announced financial results for the recently concluded 3Q2015. As per the reports, the quarterly revenues touched $545,934, 33.4% higher than the same three-month period last year.

At the end of the September quarter, Great Basin had 143 customers in U.S. who regularly contributed to revenue generation. The adoption of company’s Group B Strep Assay continued during the quarter. In total, it added about 87 customers evaluating or using the test.

According to Ryan Ashton, CEO & President, it’s good to report financial results and the overall progress of company’s business in the September quarter. In terms of customer acquisition, Great Basin grew at a whopping rate of 24%, something that it had never achieved in the past. Its growth was led by two major factors – adoption of Group B Strep assay and excellent customer base. Along with 143 customers, Great Basin also had 64 evaluations either scheduled or in-progress as compared to previous quarter’s 46 evaluations.

Company’s operating expenses increased from $2.5 million to $6.2 million over the past one year. When it comes to research and development expenses, it touched $2.9 million level against the $1.5 million level during the same period in the previous year. The primary reason for this increment was increased regulatory and clinical activities regarding Shiga Toxin and Staph ID/R Blood Culture Direct tests, as well as a few on-going developments.

Selling and marketing expenses for the September quarter increased to $1.5 million from last year’s $1 million, whereas the general and administration expenses accounted for $1.8 million against last year’s $1.2 million.

Loss from operating activities was $6.7 million in 3Q2015 against last year’s $3 million. Net income for the quarter was $13.1 million against the net loss of $17.2 million in 3Q2014. Great Basin looks forward to improving its financial and operational performance in the upcoming quarters.