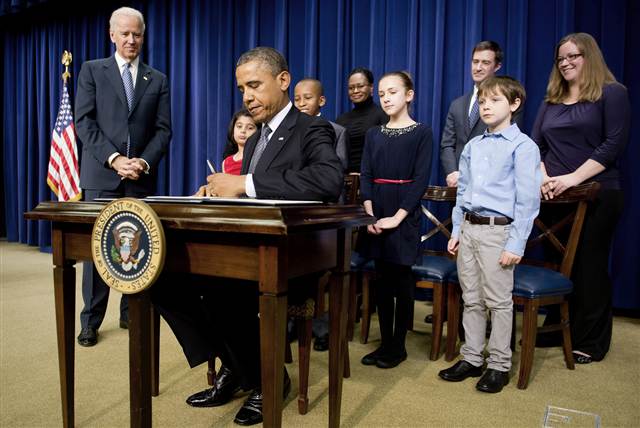 In his weekly radio addressing, Obama vowed to do everything under his control for preventing the use of assault rifles and high-capacity clip and for organizing complete background checks of people who wish to purchase weapons.

As a swipe back on National Rifles Association, he said that these gun loving pundits and special-interest lobbyists are just trying to derail the debate by naming it as “all-out assault on liberty”. He claimed that these people are doing these types of activities because this can provide more air time and money to them instead if joining the debate. But behind the scenes, they are doing everything they can do for protecting stats quo.

For decreasing the power and weight of NRA, Obama called on Americans to support him and harass the pro-gun members of Congress who are not yet acting on the issue of gun violence even after the several severe cases of gun violence. He also gave citation of the most recent gun violence attack in which 20 students and 6 adults were killed.

Professional gun enthusiasts are planning to hold demonstrations in 49 states in response to second amendment right they have for arming themselves with guns and assault rifles. These rallies are being organized by Guns Across America, a group started by retired pilot Eric Reed. According to a Facebook page of Guns across America, around 18,000 people are almost ready for joining those rallies and Alaska is the only state where no one is willing to participate in the rallies.

After debt ceiling, gun violence is becoming the second biggest topic of confliction between President Obama and Republicans. A couple of days ago President has increased the Presidential powers for bypassing congress over gun control laws. However, showing respect for policies, he did not make use of those powers on the same moment and instead of releasing any executive laws he released the proposals only and left their approval on Congress. However, he forced Congress in an effective manner for acting quickly on the proposals given by him. But Congress has not shown any interest in his proposals so far.