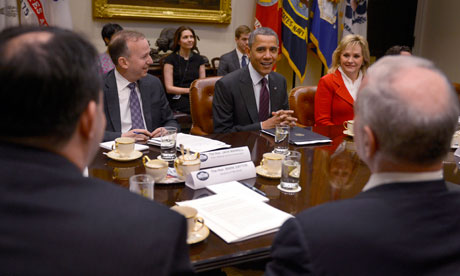 President Obama’s administration is now trying to end stalled talks about the fiscal crisis that have been the main source of worry over the last few weeks. After the Republican talks imploded in the congress, President Obama is now determined to end these talks very soon.

Before flying for a break to Hawaii with his family, Obama made a suggestion that both parties should agree to a temporary deal when it comes to taxes. The president also believes that unemployment insurance should be extended because this is the only way that the negative effects of the fiscal crisis can be avoided.

Obama also announced that he plans on signing a legislation that includes extending tax cuts and breaks for 97& of citizens during the next days. Business analysts believe that this is a positive move that will help save the economy if a deal isn’t cut by next week.

Obama spoke to various lawmakers before his break and reports say that he asked them to have Christmas cookies and sing Christmas carols before they comes back to make their decision about the deal. Negotiations hit a brick roof on Thursday due to John Boehner, speaker of the house, failing to convince his party to agree on tax cuts. This is by far the worst defeat for John Boehner, where he failed to convince 40 out of 241 Republicans.

If an agreement isn’t reached by next week, taxes will eventually increase for all Americans no matter what their income is. This has been a source of worry for many low-class citizens who believe that no one is paying any attention to them because they will be the ones facing the real problem here.

President Obama and the Democratic Party believe that the richest Americans should be the only ones paying more taxes. The main reason why this should take place is because this will help decrease the budget deficits for the federal government. This will also ensure that the Obama administration will avoid any serious spending cuts.

The Democratic Party is known for controlling the senate house whereas the Republicans are known for controlling the congress. This is the main reason why it is has become quite difficult to reach a deal as an agreement must be made between both entities by next week. If both entities refuse to sign the deal, this might be the worst crisis that the United States faces in a very long time.