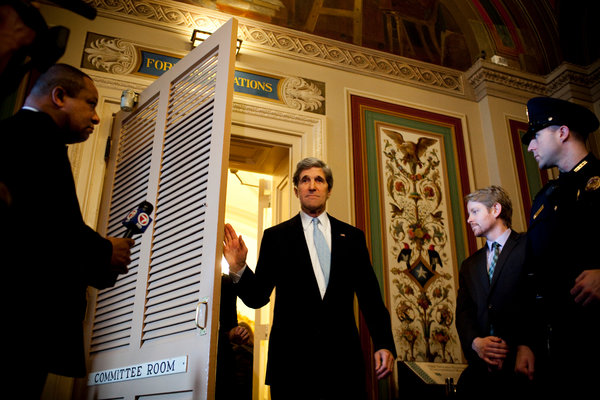 Today Senator John Kerry got Senate approval for the 68th “Secretary of State” from an unanimous support. The entire Senate is being expected to vote in Kerry’s favor later today. Kerry is a Senator from long time and has also been a Presidential Candidate in the elections of 2004 who lost to George W. Bush. He received a wide support for the seat from Senators of both parties.

Signaling the vote for John Kerry, all members of Senate signed a resolution that praised the works Kerry has done for Senate in the recent 4 years. Kerry has worked in Senate Foreign Relations Committee for a long time span of 28 years. John Kerry first came in political limelight after deep involvement with Vietnam Veterans against a war. Right now Kerry is working as committee chairman in Senate, from the time span of 4 years. Robert Menendez, a Senator of New Jersey who will replace him as the committee chairman, said,

“It is a lengthy recitation of an incredible career here in the Senate, some tremendous accomplishments on behalf of the nation and a recognition of how you are going to be an incredible secretary of state.”

The voice vote was casted in a brief hearing that was held at an ornate hearing room in Capitol, where all the business meetings of Senate committee are held usually. John came in room after the casting of vote, and said,

He also thanked everyone individually for the support.

John Kerry will be the 68th “Secretary of State” of USA. He is not being expected to cast his vote on Tuesday in his own favor, so it seems like he has used his final vote on Monday when he voted for the approval of more than $50 billion federal aid for Hurricane Sandy affected people and areas.

Senator Kerry is the handpicked choice of President Obama for succeeding his close friend and top “Secretary of State” Hillary Clinton. He is a part of cabinet reshuffle that is being done by President Obama for his second term. President has also nominated Senator Chuck Hagel for the seat of “Secretary of Defense”. Confirmation announcement for Senator Hagel is expected to come later this week.