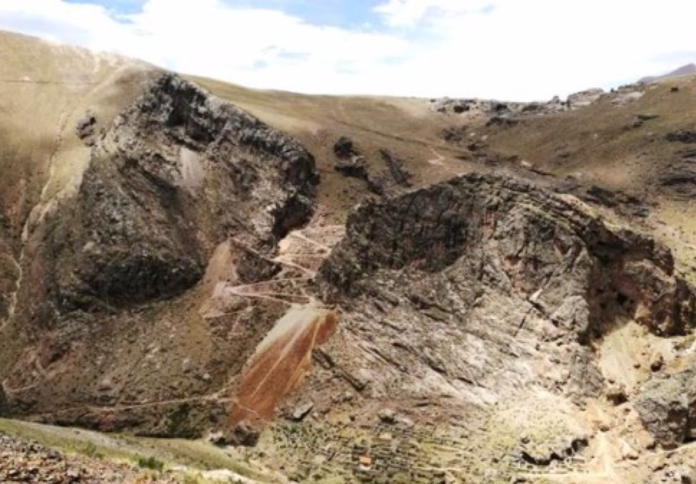 We’ve been telling you about New Pacific Metals (NUAG.V; NUPMF.OTCQX) and its massive Silver Sand discovery.

Now the word is getting out to other investors, and the share price is beginning to take off.

It’s not too late to get on board, and here’s why…

Our readers were the first to learn about New Pacific Metals (NUAG.V; NUPMF.OTCQX) and its extraordinary Silver Sand discovery.

They were the first to learn that a massive target — which is showing signs of growing to one of the world’s largest silver deposits — was 100% owned by this still-small company.

That advantage is quickly evaporating as the rest of the world is rapidly joining the party…and beginning to send New Pacific’s share price soaring.

What do they think of the company? They said that while New Pacific “…may have only one silver mine project in its portfolio, that project could turn into the most valuable silver mine in the world.”

What do they think of the Silver Sand project? They said it could host a “world-class” 385 million ounces of silver…and eventually produce 50% more silver every year than any other silver mine in the world.

My bottom line: I agree completely with their analysis.

In fact, if an investor is bullish at all on gold and silver (and they should be), they simply can’t let this bull market progress without owning a stake in New Pacific Metals. The upside potential is that large.

If you’re new to the story, let me give you a brief recap.

To set the stage, we’ve been explaining how remarkable the Silver Sand project is:

And Now:
An Extraordinary Drill Hole…

As I noted, New Pacific continues to aggressively drill Silver Sand, placing holes close enough to each other to confirm the remarkable results they’ve been getting and get the necessary data for an initial resource estimate.

You get the picture: Outstanding grades, over very long intersections, over and over.

But just the other day the drill hit something that stood out even among these exceptional results — a virtual “jewel box” of high-grade silver.

That’s a remarkable grade, over a very long length. In fact, that intersection was within a broader interval of 165.5 meters running 204 g/t silver.

With grades like this, a lot of silver can be added to the project very quickly. And the upside gets even brighter.

New Pacific’s Silver Sand is well on the way to being recognized as a world-class silver discovery. But interestingly, it’s the second big silver find of an old friend of mine.

And his last big discovery multiplied investor’s money more than 20 times over.

The good news is that Silver Sand already looks to be much bigger than the one that had created those fortunes years ago.

So to get an idea of how big this new discovery can be, you need to understand the first one…and the man who created fortunes with that discovery.

A Fortune In One Big Hit

I recommended the stock to my Gold Newsletter readers. I began buying it myself.

That company was Silvercorp Metals…and it multiplied more than 20 times over from our entry level.

We made absolute fortunes on that one.

With a result like that, you know that I was eager to invest in Rui’s next venture, New Pacific Metals, in 2004.

Rui proved to me he has an eye for exceptional value, so I was anxious to see what he was going to find next. And I was willing to be patient…because I knew he wouldn’t pull the trigger unless he had a world-class target in his sights.

Still, I held every share of New Pacific I owned over all that time…and was absolutely amazed last year when Rui called to tell me he’d found yet another world-class silver project.

The “Silver Sand” project had been outlined by a local company to be about 1,500 meters long and around 125 meters wide. (So nearly a full mile long!)

Better yet, the grades were fantastic. The local company had drilled three holes, with each cutting well over 150 meters of silver grading over 150 grams/tonne. Even better, the mineralization was near the surface.

After drilling their own holes to confirm those results, New Pacific quickly locked up the project…raised US$40 million to acquire it…and got ready to begin their own drilling. But first, Pan American Silver Corp., one of the world’s largest primary silver miners, flew down at Rui’s invitation to look at the Silver Sand project.

Pan American handed New Pacific C$22.7 million to get a stake in the deal.

Then, everyone waited for the drill results. And when they came, they were nothing short of spectacular.

Early this year, New Pacific announced that they’d drilled 55,000 meters on Silver Sand in their first drill program, in 195 holes. New Pacific has been aggressively drilling the Silver Sand Project…and as they do the scope of the silver mineralization continues to grow.

As I also noted, the recent report from Stansberry Research predicted as much as 385 million ounces.

If the upcoming initial resource estimate comes out anywhere near these numbers, I think it will absolutely stun the market and send the company’s share price soaring.

Remember, the company reported that these drill holes, all 195 of them, came in an area extending about 1,600 meters long by 800 meters wide. That’s roughly a mile long by a half-mile wide. Well outside of their original property boundary, New Pacific has gained control of a much larger area (outlined here in pink) of high-grade silver potential.

You see, well outside of the area they drilled — the land New Pacific originally gained control of — there were signs that the silver mineralization extended much further.

A hint at just how much larger Silver Sand could be can be found in this section, buried within New Pacific’s second drill-result news release:

2) Still ahead is the first resource estimate for Silver Sand — and it could stun the market with potentially hundreds of millions of ounces of silver.

Remember: No one realized how big Silvercorp was going to be back in 2003. But those who recognized the potential and got in early had the chance to reap a 20-for-1 payday.

I think that record will be hard to beat, even for New Pacific’s remarkable Silver Sand project.

But as a shareholder myself, I’m truly excited by the potential New Pacific has to multiply in value for not only myself but my Gold Newsletter readers.

I urge you to take a hard look at New Pacific Metals now, before more news comes out, and as silver prices are finally taking off.