Anheuser Busch Inbev SA (ADR)(NYSE:BUD) was a notable mover during Monday’s trading session rallying by 1.03% on above average volumes, which were 1.5 times the average turnover. The formation of higher tops and higher bottoms on the charts is indicative that bulls are using dips in the stock as a buying opportunity. Anheuser Busch currently trades above all important moving averages. The index measuring relative strength continues to surge higher and shows no signs of a reversal. Momentum indicators clearly suggest that bulls have the upper hand at the moment. The stock trades hit a fresh 52-week high during yesterdays’ trading session. 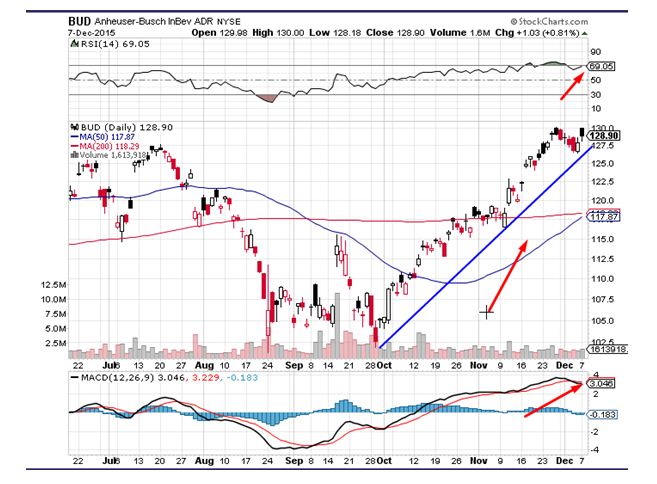 The third quarter of 2015 remained eventful for Anheuser-Busch Inbev SA (ADR)(NYSE:BUD) as it enjoyed decent financial performance as well as indulged in acquisition discussions with SAB Miller.

If everything falls in line, it will be the biggest deal that beverage industry has ever seen. Both Anheuser-Busch and SAB Miller secure first two places regarding largest companies in the industry, and if they decide to merge, the resulting entity will be bigger than anyone can think of. It will secure either 1st or 2nd position in 24 out of 30 largest beer markets across the globe.

It may be a difficult situation for other players in the market as they will not be able to control the decision of Anheuser if this deal takes place successfully. As of now, the deal is waiting for the government approval.

The 3Q2015 wasn’t one of the best three-month periods that it had witnessed; however, it managed to post decent growth in financials as well as operations. Revenues for the quarter accounted for $11.38 billion, 7.9% higher than the numbers announced during the same period in 2014 on the organic basis. The point to be noticed here is that the revenues were just a fraction lower from consensus expectation of $11.65 billion. At a time when market behaved fragile, this performance wasn’t not bad at all.

At the end of 2Q2015, the volume growth of the company was negative; however, it managed to post 1.5% positive growth in 3Q2015, which’s remarkable in every sense. The beer volume growth was primarily driven by a strong performance in Latin America and Mexico markets. Its EPS for the quarter was $1.02, lower than the consensus estimates of $1.26 due to the excessive financial cost of $810 million as compared to $366 million during the same time in 2014.

Anheuser runs a number of share-based payment programs. During the previous quarter, these programs were negatively hit by mark-to-market adjustments, leading to a negative swing of $729 million on YOY basis. It played a major role in cost enhancement during the quarter. Apart from it, most of the things worked well for the company. The EBITDA margin for the quarter was 38.7%, up 58 bps on YOY basis.

When it comes to global brand revenues, it reported a growth of 12.9% on YOY basis, with U.S., UK, Argentina and Canada came out as the best performing markets.

What’s Next For Anheuser?

The financial performance of Anheuser was better than what most of the analysts had forecasted, which prompted the management team to revise its yearly guidance. On the back of these results, Anheuser has decided to revise its revenue per hectoliter growth to ahead of inflation from previously announced in-line with inflation. As the scenario in China continues to be sluggish, it doesn’t expect any near-term rise; however, other markets like Brazil, U.S. and Mexico are expected to record excellent growth in revenue per hectoliter.

Since the day Anheuser-Busch Inbev announced its acquisition deal with SAB Miller Plc, the market responded with mix reactions. Experts think that if this $110 billion worth of deal happens, Anheuser will cover over 50% of the profit that the industry generates. U.S. lawmakers have certain doubts about its execution, which has forced company’s CEO Carlos Brito to meet them and clear the air.

The past few months have been passive for the company and thrown many challenges in its direction. However, the way it has bounced back is admirable. Once the SAB Miller deal gets executed, stock prices will touch new heights.