Bellatrix Exploration Ltd (NYSE:BXE) was a notable outperformer during Thursday’s trading session, rallying by 3% on relatively heavy volumes. The stock has been in a steady downtrend ever since it was unable to breach resistance at levels of $2.267 but is showing signs of forming a support near levels of $1.518. Bellatrix currently trends below all moving averages, which is considered to be a bearish sign. The indicator measuring relative strength continues to trend higher indicative of the strong buying interest. The oscillator for momentum is showing no signs of strong bullish reversal. Traders see the stock heading to levels of $1.74in the near term. 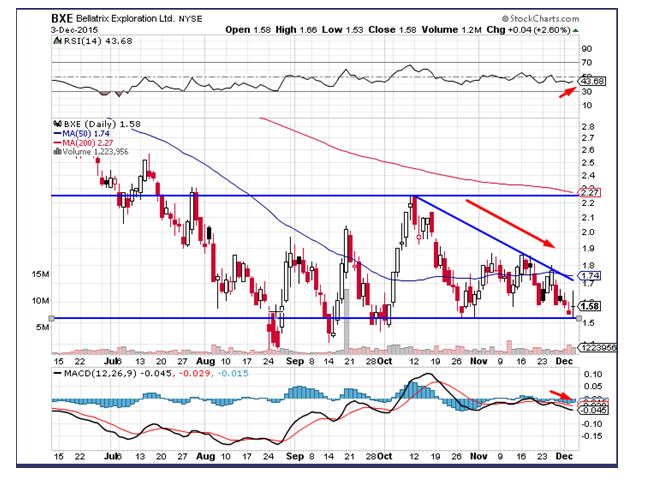 Bellatrix Exploration Ltd (TSE:BXE) recently revealed a series of updates on its developments during the 3Q2015. The company President, Raymond Smith, was of the view that the 3Q2015 report highlighted the profitability and importance of Spirit River and Alder Flats areas. He also pointed out that the report showcased the effectiveness of the company’s recent cost reduction programs, which have resulted in the company becoming more efficient. The president also hinted that the company still has the option of withdrawing $259 million through liquidity, if things got worse. Furthermore, the company was also able to reduce its debt by $15 million in the current quarter.

Mr. Smith also revealed that his company had not only off-set the production decline, but the year-to-date drilling operations have also resulted in the production volumes growing by 14%. Financially, the 3Q2015 report from BXE was slightly better than the same period in the preceding year. Although total revenues had declined, on a year-over-year basis, but the company’s cost cutting initiatives helped it report an EPS of $0.26, compared to $0.23 in the previous year. Additionally, a decline in bank debt resulted in a better balance sheet, than that of the preceding year.

However, despite the improving situation at Bellatrix, institutional investors have started to dump the stock. Between 2Q2015 and 3Q2015, the company suffered a loss of 17% of its institutional investment. Currently, Orange Capital is the leading institutional investor of BXE, with a stake worth $50 million. The other remaining investors follow in close pursuit, hinting that some investors still believe in the stock. Unfortunately, analysts are weighing in bearishly on the stock and have posted an expected EPS of $-0.07 for BXE. Wall Street analysts on the other hand believe that the stock would hold its ground for the next quarter and have awarded it a price target of $2.557.

Bellatrix Exploration Ltd (TSE:BXE) had trade volumes of 427,805 during the December 2 session, to close at a share price of CAD2.08, after reporting a decline of 1.89%.