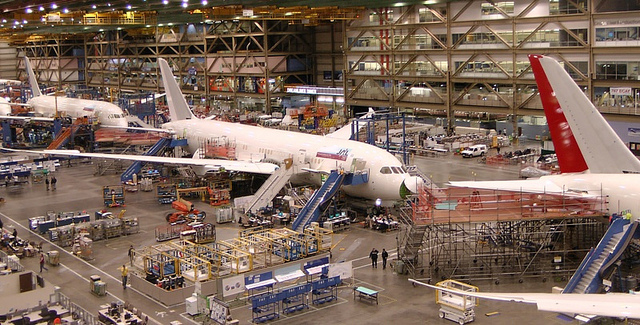 Boeing Co. is now planning to cut hundreds of jobs at their Dreamliner plant which is located in South Carolina. Now here it should be noted that this plant is currently producing 787 Dreamliners on a yearly basis. This is indeed not good news for those who depend on the job at Boeing Co. for earning a living for their children and their families. The Wall Street Journal has something different to say in this regard. The Journal asserts that the cutting of these jobs is not linked to the previous grounding of a troubled jetliner. The Journal also said that these job cuts are not something new in the company and the contract workers are going to be the ones taking the blows.

The emergency landing of the Jetliner was due to the errors and malfunctioning of two high level batteries. The incident had taken place in the mid of January this year. These cutoffs are going to effectuate the lives of nearly 20 % of the workforce at the plant. Presently, the plant is employing around 6000 individuals. So, with 20 % of them removed from their jobs, the reaction that is going to be generated is indeed going to raise a number of questions. What’s more interesting here is that the company has offered no sort of confirmation of these layoffs, but what they did mention is that Boeing plans to reduce their reliance on the contract workers, specifically at the South Carolina plant.

Marc Birtel, a spokesperson of the company, has said that the company is quite used to hiring contract workers in times of the surge activities and for supplementing their workforce. Moreover, he has also added that his practice is not something new for the aerospace industry. He continued by saying that we have also been vigilant in training our employees and workers for the betterment of all due to which they are now looking to lower down their reliance on the contract labor.

Not to forget here that this facility is the 2nd largest factory of Boeing, after the Everett Facility that is located north of Seattle. In between these 2 the company turns out nearly 5 Dreamliners on a monthly basis. Furthermore, the company has also stated that the production has not slowed down due to the grounding of the 787 and they are quite optimistic on increasing the growth to higher levels till the end of the year 2013.