Arcos Dorados Holding Inc (NYSE:ARCO) continued the short term rally for the fourth consecutive day as it ended the last trading session with a gain of 2.91%. The volume of the day surged to 2.7 million against the daily average of 982,000, encouraging the bulls. The stock has been in a huge bear market for a long time now and the last phase of the decline has been contained perfectly in a channel. The price action of the last session signalled a possible breakout, which must be confirmed with another couple of positive candles by the end of the week. 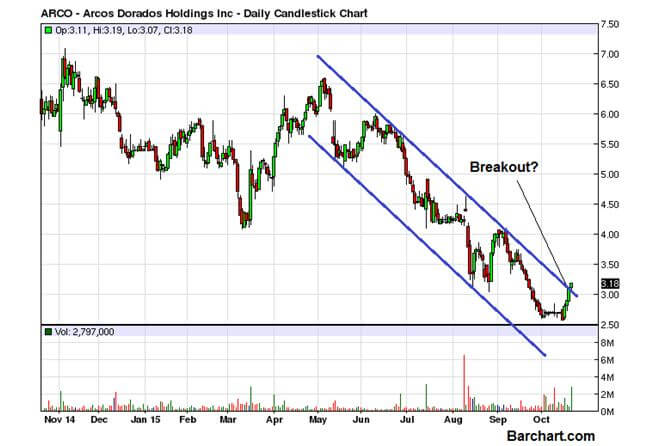 After registering decline of over 30% last month and almost 50% so far in the year, the shares of Arcos Dorados Holding Inc (NYSE:ARCO) are making a comeback. The company can trace its problems to its most strong market, Brazil, which contributes for almost 47% of total sales. Brazil economy is witnessing a rapid slowdown and its GDP is projected to contract by nearly 3% this year. The nation’s currency, the real, has declined 35% against the dollar so far in 2015 and inflation is at 9.5%. All these factors have hampered the spending power of consumers in Brazil.

Due to the poor economic fundamentals, fewer consumers are patronizing quick service chains including McDonald’s. Arcos’ Brazil revenue has declined over 19% in the first two quarters of 2015 over the last year. The higher concentration in Latin America and Brazil has weighed on overall financial performance. Along with this, the numbers are denominated in U.S. dollars, adding more to company’s woes. After accounting for over $55 million of unfavorable foreign currency impact, the net loss in 1H2015 tripled to more than $74 million over the comparable period.

The decline in Arcos stock in September came after Standard and Poor’s lowered Brazil’s credit rating to ‘Junk’. Of the massive $722 million of debt, the company has, almost $218 million comes from Brazilian real-denominated bonds, to be paid in 2016. The bonds yields surged to over 23% the day after credit rating was lowered.

Arcos has decided to mitigate its long-term debt over the coming quarters and has suggested that it will create the value in its specific appreciated real estate in an attempt to lower fixed borrowings. Also, the company needs to weather the existing decline in the economy of Brazil and plan measures to attract consumers so as to avoid further margin and revenue contraction.