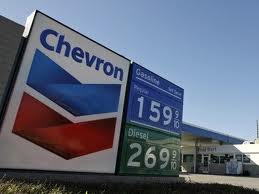 Dallas, Texas 07/05/2013 (Financialstrend) – Chevron Corporation (NYSE:CVX), an oil behemoth, is reaching new highs since the last two years despite pending legal battle with the Ecuadorian government and despite the great risk it took in Argentina. It closed at $119.08 yesterday, merely over 5% lower than its recent top.

CVXhad an impressive first quarter with net incomeof $6.2 billion,although the drop in crude price from 2012 level caused a $300 million drop on a year on year basis. However, the company increased its output by 20000 barrels per day on the same basis and invested $8.9 billion in capital expenditures, an increase of $2.5 billion.

The two big bets for CVX seem to be the liquefied natural gas (LNG) and the Shale gas. The company holds a 36% stake in a very promising land in Angola, with a rough valuation of $130 million per year if run on full capacity. Given that demand for LNG increases, as a substitute to oil, these investments could provide a decent return. Regarding shale gas, the company has entered into an agreement with the Argentine state-controlled energy producer YPF. The two companies will develop the VacaMuerta basin, having globally one of the most promising shale formations, estimated by Chevron as the second largest reservoir of shale gas. The field might contain 22.8 billion barrels of oil and gas, if the estimate of YPF is accurate. However, according to many analysts, this step is risky on the part of Chevron, since the Argentine government kicked the Spanish oil company Repsol out of the country without any compensation,by forcibly nationalizing it last year.

Most of the analysts though recommend buy or hold ratings, given the dividend yield of 3.4%, a profit margin of 11.9% and earnings per share of $13.23.