Denison Mines Corp (NYSEMKT:DNN) was a notable decliner during Wednesday’s trading session declining by 5% on relatively high volumes, which were 1.3 times the daily average. The stock has been underperforming the broader markets over the last several months. Denison Mines has been forming lower tops and bottoms indicative of bears using every rally as a selling opportunity.The oscillators, which measure momentum, are clearly indicating that bears are in total control at the momentum. The stock trades below all daily moving averages. The index measuring relative strength has given a fresh sell signal.. Traders see the stock heading to levels of $0.360. 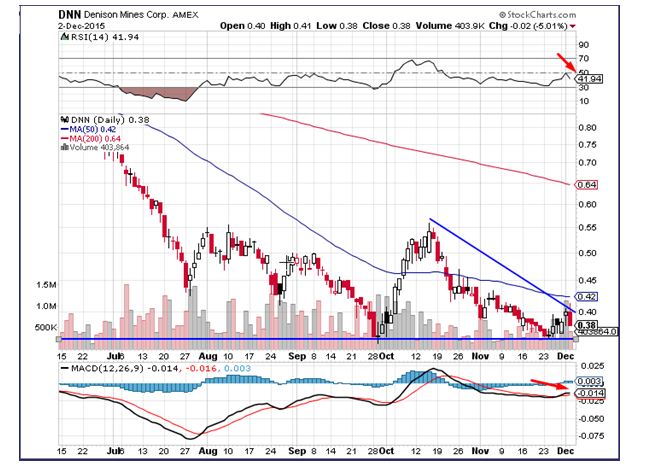 Denison Mines Corp. (NYSE MKT:DNN) announced getting US$1.25 million as initial payments on the sale of Mongolian interests to the Uranium Industry of Czech Republic. The sale to Denison’s Gurvan Saihan joint venture was completed on November 25. The company’s President & CEO David Cates said that sale was a major achievement for them.

He said that the move was a part of the company’s strategy to sell its non-core international assets to fund other projects in the Athabasca Basin region. The sale talks were on for several months and finally the hard work has paid off for the company and will support many other projects of the company too without using credit facility.

Uranium Industry is one of the largest miner and processor for uranium in the Czech Republic. It is currently very active in Mongolia and a Mon Czech Uranium joint venture was inked between them and Mon-Atom LLC earlier this year on June 17. Uranium Industry will help GSJV in applying for license for mining in four locations that the company has exploration license for.

Denison Mines Corp. (NYSE:DNN) also reported its 3Q15 results recently. The Gryphon Deposit has earned 43 million pounds of uranium at the Wheeler River facility of the company. When united with Phoenix deposit, the location has resources to the tune of 70.2 million pounds. This announcement has made this Wheeler River property project a key player in the uranium industry in the Athabasca Basin region.

In another major development, the company has appointed Lukas Lundin as the new Executive Chairman of Denison Mines. Lundin boasts of a vast portfolio in the resource industry and he has initiated many profitable mergers in various companies. His most renowned achievement was the acquisition of Red Back Mining Inc. His most recent appointment was as a Board member of many publicly traded firms. He was a former Director of Denison Mines in 1997 and with his appointment the company is going to step forward in achieving new heights in the uranium industry. Denison is currently concentrating more on its Canadian properties.