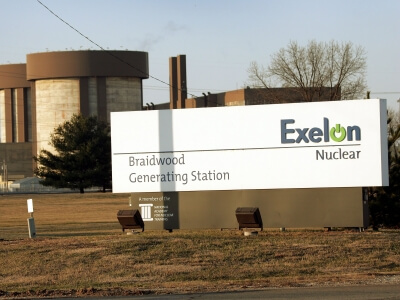 Dallas, Texas 05/28/2014 (FINANCIALSTRENDS) – Three different nuclear plants that are owned by Exelon Corporation (NYSE:EXC), the Chicago-based company, have been unsuccessful in securing contracts at the key auction that was last week, which decides exactly which of the power plants will provide power to its electrical grid. The company’s Byron & Quad Cities plants located in Illinois & the Oyster Creek plant located in New Jersey had been priced-out of the auction by the competing power providers, said EXC last week. This jeopardizes the future of these assets.

Exelon Corporation (NYSE:EXC) relies very heavily on the revenue from   this capacity-auction to prop-up the nuclear plants & had been anticipating results of the annual bidding-war as it also decides the fate of many plants that the company has not been able to operate profitably. UBS Investment Research’s executive director for the U.S. electric utilities, Julien Dumoulin-Smith said that the reality is now that it’s up to the state to finally choose what they wish to do. It is very clear that they are out of the money. It is now up to the state to take the decision about whether they now want to keep the assets running /not.

With many of EXC’s 6 nuclear plants within the state now on the bubble, many rumors had been doing the rounds in Springfield that the company would now ask the state for a kind of a bailout. Chris Crane, the company’s chief executive officer said that Exelon Corporation (NYSE:EXC) is not now seeking any legislative fix but the House Resolution had surfaced last week, which had been sponsored by Michael Madigan, , the House Speaker. This urges the United States EPA, and the Federal Energy Regulatory Commission, as well as the electric grid-operators, to now adopt the policies that are very friendly to nuclear power.