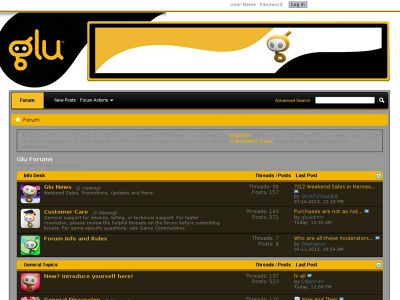 Dallas, Texas 01/10/2014 (FINANCIALSTRENDS) – Glu Mobile Inc. (NASDAQ:GLUU), the $334 million market capped firm, which is into designing and marketing of popular mobile games, runs on both Apple backed iOS and Google backed Android operating systems. It’s action and adventure based digital games, are widely downloaded by users of tablets and smart phones from across the globe.

On January 7, Glu Mobile Inc. (NASDAQ:GLUU) was upgraded by Craig Hallum to a “Buy rating” from its previous recommendation of “Hold” and has also raised the price target for the firm to $6. These latest upgrades are significantly different from the downgrades recommendations that this games maker has attracted from analysts like B. Riley and Co.

These upgrades for the stock come on the back of significant new releases that Glu Mobile Inc. (NASDAQ:GLUU) has lined up for the next few weeks in the run up to its fourth quarter earnings release slated for February 3. The launch series of new games was kicked off yesterday, when “RoboCop was released in partnership with Worldwide Theatrical Release.  This new release will in the first phase be available only for for iPhone, iPad, and iPod touch devices. This realease has happened in partnership with movie production house MGM Resorts International (NYSE:MGM) which is a unit of Metro-Goldwyn-Mayer Inc. The movie major holds the rights for the RoboCop series of Movies which have made this a popular fiction hero. The latest movie of the series with the same name is scheduled to hit the screens on Febuary 12 and will be a joint effort between Metro-Goldwyn-Mayer Pictures and Columbia.

Commenting about the joint launch, Niccolo de Masi who is the CEO of Glu Mobile has been quoted as saying,  “As the leader in free-to-play action adventure games on mobile, we believe RoboCop: The Official Game delivers intense action and impressive character authenticity. We are excited to offer the millions of RoboCop fans around the world a fantastic gaming experience.”