Exxon Mobil Corporation (NYSE:XOM) was a notable mover during Friday’s trading session rallying higher by 0.55% on high volumes. The stock has witnessed massive selling pressure at higher levels and has been unable to breach the resistance level at $82.80, which is a negative sign. Exxon Mobil currently trades below all daily moving averages. The MACD oscillator is showing no signs of an intermediate bullish reversal. The RSI indicator has given a fresh buy signal, which is considered to be a huge positive. Traders believe the current rally could be short-lived and the stock could head to levels of $75.94 in the near term. 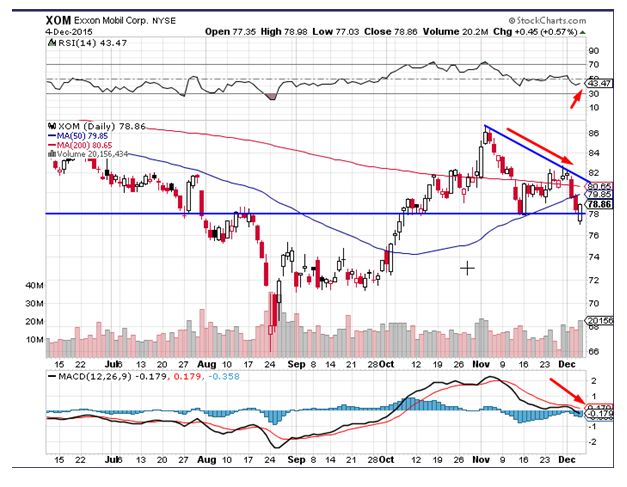 Exxon Mobil Corporation (NYSE:XOM) has been exercising extensive cost control procedures and has announced that it would continue to improve capital efficiency in 2016 and 2017. This has also included cutting of the company’s share buyback program by half. Additionally, the company has also issued guidance that it would buy back shares worth $500 million in 4Q2015 alone. Currently, the company expects its capital expenditure to be approximately $34 billion for FY2015. However, as the company enters FY2016, it still falls short of its operating cash flow. This is why XOM needs another product in the market, in order to fill the deficit in net operating cash flow, approximately $7 billion.

In its 3Q2015, XOM reported earnings of $4.2 billion, which had declined by 44% on a year-over-year basis, but had increased by 7% as compared to the previous quarter. Additionally, the company’s cost cutting procedures proved to be effective during the quarter, resulting in lower corporate costs. This creates an offset of $500-700 million in terms of average quarterly corporate financing expenses. Unfortunately, the cost cutting initiatives had also resulted in higher downstream results, leading to increased production and a negative impact on quarterly earnings.

XOM, like many other oil & gas companies, suffered another huge loss due to falling oil & gas prices. This is why the company has been exercising cost cutting initiatives extensively. So far, the company has been able to reduce $12.5 billion in capital operating costs, since the start of the year. It is important to note here that XOM had originally planned to reduce capital expenditure by $4.5 billion, as compared to 2014 figures. However, the main problem for XOM is its policy of paying a growing and reliable dividend. Although this tends to attract a number of investors towards the stock, but in the current conditions it means more debt for the company.

Unlike many of its competitors, XOM has remained undeterred in its expansion projects. The company had planned to bring a total of 21 projects online, between 2012 and 2017. Despite the falling oil prices and the financial condition of the company, XOM still seems to be going ahead with these projects as planned. Additionally, XOM has also been expanding its current projects in the US, but has kept extraction activities to a minimum. Although this means additional expenses, with little to no profits in the quarterly report, it can pave the way for XOM to maximize its profits once oil regains value in the market.

In FY2015 alone, the company has so far brought a total of 5 new projects online. However, since most of these projects are outside of North America, XOM has been trying to improve their efficiency, so as to maximize its profits from those regions. Unfortunately, the demand for XOM products has been declining in the Asian markets as well, but due to the confidentiality agreements made by the company, XOM has not yet stated a reason for this decline.

Much of XOM’s decision making is surrounded by its view that the demand for LNG would triple and the demand for natural gas would grow at an annual rate of 1.6%, between 2010 and 2040. Even though the oil & gas industry has taken a serious blow, due to declining demand in the US, the company continues to expand and positioning itself to grow robustly once the situation reverts.

As compared to other companies operating in the oil & gas market, XOM has the lowest dividend yield and only a slightly lower net debt ratio. Overall, the company is performing averagely as compared to its peers, despite being the largest gas producer in the US. One of the major problems that the company overlooks is that it never prefers to restructure its finances. Instead the company tries to right-size itself. Such moves tend to back fire, due to lack of proper management.