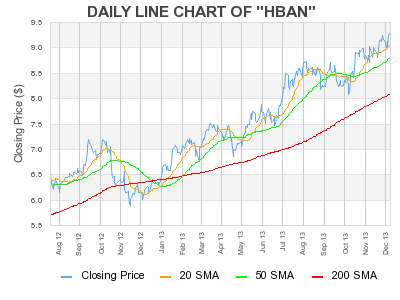 Dallas, Texas 12/10/2013 (FINANCIALSTRENDS) – Huntington Bancshares Incorporated (NASDAQ:HBAN) is slotted under the regional bank and has a major presence in the Midwest region of U.S. It boasts of a market capitalization of $7.72 billion and is tracked by the S&P 500 index. In the recent past the bank has been attempting to mount a rejuvenation exercise designed to shape up the company to emerge as a large cap bank. As part of these reorganization exercises the bank has decided to internally promote its executive team to take on larger roles. These promotions include Jim Dunlap who has been given the reins of the group’s wealth and government banking group in addition to heading its commercial and regional banking segments.

Huntington Rings In Major Reorg In Its Executive Team

Announcing the reorganization, Huntington Bancshares Incorporated (NASDAQ:HBAN) Chairman, President and CEO Steve Steinour has been quoted as saying, “Jim’s broad experience positions him well to drive improved profitability and deepen relationships within the highly competitive wealth and government banking industries. Jim has played a key role in the success of our commercial and regional teams as well as our strategies for investment and expansion in Michigan.”

As part of the same reorg, another long serving executive of Huntington Bancshares Incorporated (NASDAQ:HBAN) Rick Remiker has been internally promoted to lead the banks commercial banking segment and will be replacing the retiring Dan Benhase. The third promotion announced was that of Paul Heller who has been given complete charge of technology and operations. He will be handling the role of company CTO and COO and by consolidating these two key operations under a single leader, the bank hopes to leverage the synergy.

Over the past one year, Huntington Bancshares Incorporated (NASDAQ:HBAN) stock has been trading at levels which are well above the bench mark banking index and the wider S&P 500 index. It has posted an impressive 50.6 percent increase in its market value over the trailing 12 months in spite of the constant ebb and flow in investor sentiment in banking stock which was primarily dictated by the impending tapering moves of Fed on Federal stimulus package. In the near term too the stock has posted steady gains of close to 6.77 percent in the past one month of trading.  When trading was suspended for the day yesterday the stock of Huntington Bancshares Incorporated (NASDAQ:HBAN) was trading at $9.3 per share which has taken the stock price well over its prior 52 week price point and is also well on its way to breach the analysts predicted price target of $9.36 per share. In addition to strong gains at the browsers, the stock has also been at the forefront of returning share holder value by paying out dividend yield of 2.15 percent per share which translates to dividend payout of $0.2 per share over the past 12 months.

It was announced yesterday that Huntington Bancshares Incorporated (NASDAQ:HBAN) has been rated as one of the “Best Places to Work for LGBT Equality” as per the ratings put together by Human Rights Campaign (HRC) Foundation Corporate Equality Index for 2014.

Commenting about the rear recognition bestowed by its employees on the firm, its CEO and President Steve Steinour has been quoted as saying, “It is the result of grassroots employee engagement with executive leadership toward a shared goal of better demonstrating Huntington’s commitment to the LGBT community. I couldn’t be more proud of our colleagues for uniting together to improve Huntington’s HRC Corporate Equality Index score. Recognition among the Best Places to Work by the Human Rights Campaign is a great honour and validation of our ongoing efforts to be a leading employer of choice.”