Twitter Inc (NYSE:TWTR) was a notable decliner during Wednesday’s trading session declining by 0.5% on relatively high volumes, which were 0.5 times the daily average. The stock has been underperforming the broader markets over the last several months. Twitter has been forming lower tops and bottoms indicative of bears using every rally as a selling opportunity.The oscillators, which measure momentum, are clearly indicating that bears are in total control at the momentum. The stock trades below all daily moving averages. The index measuring relative strength has given a fresh sell signal, which is a bearish sign. Traders see the stock heading to levels of $24.50. 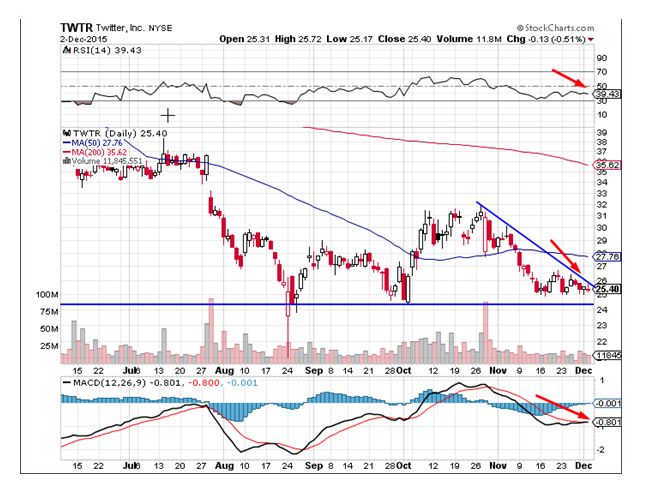 A report from the extremist program at George Washington University indicates that ISIS supporters are tapping into the power of social networks through Twitter to spread their influence.

The report claims that more than 300 American supporters of the radicle terrorist group have been using the social platform to recruit new individuals as well as spreading their propaganda. According to the report, such a Twitter accounts are usually suspended once they are reported. However, the account owners usually seem to take pride and view a suspended account as an honorable thing.

Also, the process seems to be an endless circle because similar new accounts pop up as soon as the old ones are suspended. Furthermore, the supporters are continuously changing their tactics making it more difficult for authorities to terminate their presence on the online platform. The researchers claim that most of the people who own those accounts hide behind anonymity. Twitter spotted some of them using its geo-tagging tools while the researchers used clues such as “Al-Amriki” which means “The American.” The also analyzed some cultural references, language, and the spelling.

Some of the cultural references include the use of a green birds, lions and black flags as a scriptural derivative from a hadith from Prophet Mohammad. One particular clever case was the use of the Detroit Lions Symbol to represent ISIS support.

According to an analysis provided by the extremist program, 14% of the followers are females whose average age is 26. It further suggested that two out of every five followers have converted to Islam and most of them have traveled abroad or attempted to do so.

The report also categorized ISIS support accounts on Twitter in three categories: Shout-outs, Nodes, and Amplifiers. The Nodes are the top accounts for ISIS on Twitter whose main agenda is to come up with content. The Amplifiers retweet material to generate more audience, and the shout-outs are responsible for creating awareness about new accounts. One of Twitter Inc (NYSE:TWTR)’s spokespersons declined to comment on the matter but pointed to existing policies that discourage any threat of violence.