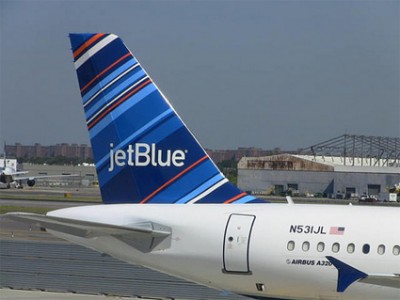 Dallas, Texas 05/30/2014 (FINANCIALSTRENDS) – JetBlue Airways Corporation (NASDAQ:JBLU) continues with development of the company’s roster of global codeshare partners, and it has announced that it is waiting for regulatory approval for the codeshare passenger-sharing-pact with Singapore Airlines. These carriers already had their interline pact which among other things, had allowed these airlines to handle bags of the other’s fliers. But if this particular pact is approved, it would then allow much deeper ties between these carriers.

The codeshare pact allows the airlines to sell their connecting seats on the itineraries that involve both the airlines. For example, a JBLU customer would then be able to book one ticket from JBLU to fly from NY to SF on JetBlue & then connect to the onward Singapore Airlines flight straight to Hong Kong. JetBlue Airways Corporation (NASDAQ:JBLU) pledges that this expanded partnership would then provide the customers seamless connections between these 2 airlines, combining the flights on both the carriers and very easily facilitating 1-stop ticketing & baggage check-in. Both the carriers are saying that their codeshare flights will then become available for booking at both the airlines once the regulatory approval has come in.

Under this proposed codeshare, JetBlue Airways Corporation (NASDAQ:JBLU) customers would then gain access to 5 of the Singapore Airlines destinations in Europe & Asia. The customers of Singapore Airlines would then gain access to 16 of JBLU’s U.S. destinations. This move comes even as JBLU has very aggressively expanded the list of partners. If this agreement receives approval, then Singapore would become the 5th new codeshare-partner since 2013. It was only 2 weeks ago that JBLU had announced a very similar partnership with the Turkish Airlines. Aer Lingus, and Qatar Airways as well as South African Airways were the other Airlines that had announced their codeshare pacts with the company since 2013.