LinkedIn Corp (NYSE:LNKD) was a notable decliner during Wednesday’s trading session declining by 2% on relatively high volumes, which were 0.6 times the daily average. The stock has been in a massive uptrend outperforming the broader sector over the last couple of years. LinkedIn has been forming higher tops and higher bottoms but is currently facing resistance at levels of $260. Traders believe the stock could find support at levels of $239. The index, which measures relative strength, has formed a lower high, indicative of the strong bearish presence at current levels. The MACD oscillator has given a sell signal. 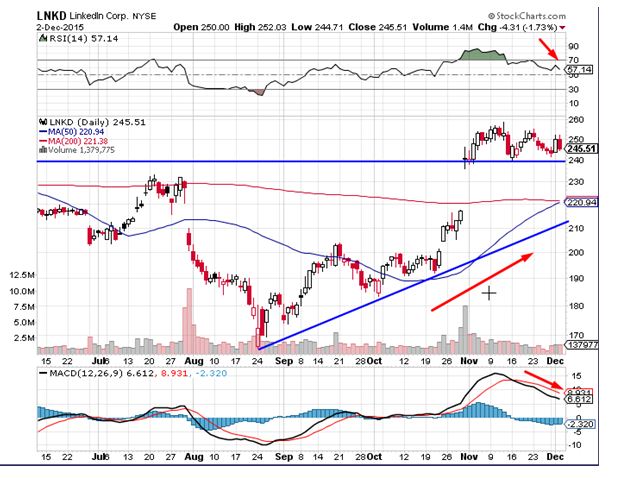 LinkedIn Corp (NYSE:LNKD) has appointed new managing directors to man the helm in Europe, Middle East and African region and the Asia-Pacific region.

The company selected John Herlihy to oversee the EMEA region where he will lead the company’s business. Mr. Herlihy will be responsible for the member growth as well as the strategic decisions regarding his respective jurisdiction. The company gave the Managing Director’s position for the Asia-Pacific region to Olivia Legrand. She will assume the position as of January 1, 2016. Legrand will be in charge of two positions because she will also get to keep her current position as the head of marketing solutions for the company in the Asia-Pacific region.

Mr. Herlihy previously worked at Google for the past ten years. He was the head of Google Ireland and the Vice President of SMB sales in the company. During his time at Google, he led the company’s operations and sales while working with about 2,500 people in more than 100 markets. Before that, he was affiliated with major tech firms in the US and Europe where he held leadership positions. He is also a non-active director in various public and private companies particularly in the software, biotech, finance and agri-food sectors.

Herlihy’s predecessor is Ariel Eckstein, who has been the company’s managing director in EMEA for the past four years. LinkedIn recently upgraded Mr. Eckstein to a global leadership position where he will lead a global team to cater to LinkedIn’s largest customers.

Legrand has been with the firm since 2012 though she has more than ten years’ experience in the Asian market with her history in other firms. She will take over after Hari Krishnan, who has held down the role of the Managing Director for Asia-Pacific since January 2013. Before that, he served as the company manager for India. Krishnan is the company’s first employee in Asia. He has been offered a job at PropertyGuru where he will be the Chief Business Officer as well as the firm’s president.