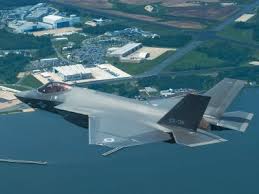 Dallas, Texas 12/05/2013 (Financialstrend) – Lockheed Martin Corporation (NYSE:LMT) is on course to deliver the much awaited F-35 by July 2015, announced Pentagon on Dec 4, 2013. Making the announcement was Chief of the program for F-35s, Lt.Gen. Chris Bogdan, who appreciated the ‘good’ progress the company was making towards meeting delivery timelines.

Chris Bogdan who is a 3-star general, and heading the F-35 program for about a year now, believes that 2015 dateline is achievable only when the software which will accept data from various sensors and analyse them for delivery of weapons is in place.

According to the general, Lockheed Martin Corporation (NYSE:LMT) has written more than 11 to 12 million software code lines for the related systems, while the core jet-related programing itself ran into 8.5million lines of code.

In the current phase, the flight testing results are being incorporated into the already built planes. Thus modified fighter planes will then be deployed in the first phase of combat, announced Bogdan.  It is expected that the Air force will first begin to fly the F-35 by 2016, while the Navy, the other division which will also use the Lockheed Martin copters, will begin to fly these warplanes by 2018.

Lockheed Martin Corporation (NYSE:LMT) was commissioned by the U.S. defence forces to develop a series of war planes that could fly undetected by enemy radars.

The models which are currently on training machines are the Marine Corp’s B-model, which has helicopter-like features, a Conventional A-model, and the third the Navy’s C-model, which allows the landing of aircraft carriers.

In addition to the U.S. there are eight other countries, across the world who commissioned Lockheed Martin to produced F-35 for their forces. These include Britain, Norway, Italy Netherlands and Denmark in Europe, Turkey and Israel, besides Japan and Australia.

Many have questioned the need for persisting with the program, when contractors have delayed the production of the required machines and other issues which have led to the program going off-track and being delayed by years, Pentagon remains committed to the original vision and mission of the program.

However, the program is seeing some success in recent times as all stakeholders show more commitment to the program.

According, to Bogdan, the earlier blame-game between the contractors and the stakeholders of Pentagon’s most ambitious program has now matured because of improved communication, ever since he has taken over in July 2012, as Deputy Director.

Apparently, the program which has far exceed its initial brief, scope as well as budgets for development has been a cornerstone for Pentagon believe experts.

Lockheed Martin Corporation (NYSE:LMT) efforts in bringing greater communication to the project and continuous dialogue between the team leading the production of the machine with Bogdan has definitely moved the F-35 program on track to completion, the General was found to have commented.

Additionally, as more countries begin to show interest in the program it allows the manufacturers to improve on the machine and bring down the overall costs by each passing year.

F-35 that Lockheed Martin are manufacturing are the hallmark of great engineering as the sensors it carriers allows for 360 degree information on all threats and challenges being captured, processed, analysed and fed to not just the pilot of the plane but the ability to share the same information with related systems lacking such information.