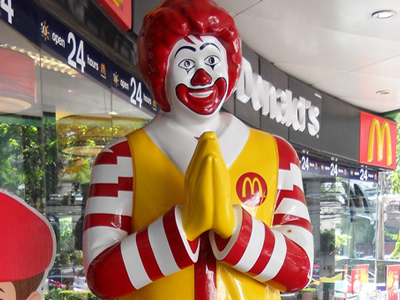 Dallas, Texas 07/24/2013 (Financialstrend) – The price targets for McDonald’s Corporation (NYSE:MSD) were grounded by J.P. Morgan Securities and BMO, to $105 from $109 and from to $107 from $110 respectively, the decrease in price target is due to second-quarter earnings which was lower than expectations. On Monday the company released its second-quarter results where revenue fell to $7.08 billion from estimation of $7.10 billion, MSD reported $1.32 as earnings per share (EPS) which missed the estimation of $1.40 by Thomson Reuters. The company’s Board of Directors also recently announced its quarterly dividend of $0.77 per share which should paid on September 17, 2013.

Following these announcements Janney Montgomery Scott analysts downgraded the shares of McDonald’s Corp. to a “neutral” rating from a “buy” rating, Stifel Nicolaus analysts rated the stock as hold, sixteen investment analysts have rated the stock with a buy rating and twelve have given hold rating for the shares of MSD. The company is now operating 34,480 restaurants in nearly 119 countries, it is facing an upbeat competition in the market of china, and it is looking forward to create balance between its owned stores versus franchised stores. It has dynamic markets in countries like Malaysia and South Korea.

McDonald’s Corporation (NYSE:MSD) had closed on Tuesday with a price of $96.67 per share, which was observed to be a decline of 0.84% over its previous close. Through the trading session, the stock had set intraday low at $96.68 and intraday high at $97.72 per share. In the past 52 weeks, the company had touched bottoms at $83.31 and peaks at $103.70 per share. There are presently 1 billion outstanding shares in the market with 45% institutional holding and $97.01 billion market cap. On Tuesday, the stock had a trading volume of 6.99 million shares and average level of trading at 4.54 million shares per day.