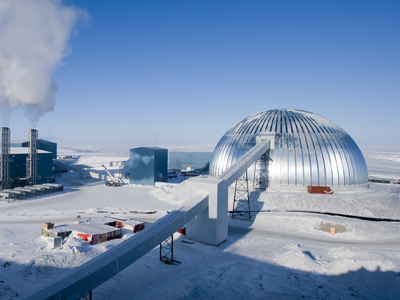 In the past eleven months, ever since prices dropped in January after historic surge in prices in 2012, metal prices, especially gold prices slid considerably. This has had its impact on the gold mining industry. In the past year, the big names in the industry, Barrick Gold, Ashanti or Newmont, share prices have not been able to see massive growth, even if the companies have managed to perform well in bits and parts.

Incidentally, Newmont Mining Corp (NYSE:NEM) had seen a surge in gold production in October this year, even as share prices slipped because of the cut-back in copper production in its Boddington mine in Australia, while its key ore-extraction mine in Indonesian Batu Hijua landed low-grades of ore for copper. The total output for NEM was at 1.28 million, justifying the rise of 4% in gold production for the company.

With Ghana’s Akyem gold mine beginning production for commercial sale in October has definitely had a positive outlook for the company in the coming months.

Newmont’s copper output has been tugging the overall performance of the company and there have been several new mining opportunities that NEM has been exploring in the recent past to bolster the slide. This time around, in Nov 2013, Newmont has been attempting to be part of a larger group of companies, which will be headed by Aaron Regent, who is also the CEO of Barrick, to bid for a beleaguered copper mine- Las Bambas, in Peru.

Owned by Glencore, Xstarta, the mine is up for sale as part of the overall merger deal with China. The current bid for the mine is at $6 billion and the second round of bids are to be placed before the end of December.

Change of guard: Board member resigns

Newmont Mining Corp (NYSE:NEM) has also announced that Mr. Thompson will be withdrawing from the Board, after his dedicated service to the company. The reasons for the resignation are considered to be personal and not due to any conflict in opinion with the company.

NEM has been through the motions of surviving in the intensely competitive mining industry. Despite the drive down in prices, NEM has not taken to the industry norm and cut production. Instead it has chosen to plough on and post 2015, is expected to see a cut-back. In the meanwhile, it does propose the sale of its Nevada site disposal for $83million in exchange for the common share of 5 million which Klondex the mining company buying the Midas operation will bring.

Industry norms dictate that Newmont Mining cut back on the overall production. However, for Newmont the focus has been on maturing its core assets by looking at low cost consolidations and long term growth, over immediate cost-management. Definitely, for Newmont the deep-pockets does give it the luxury and leverage, which competitors lack!