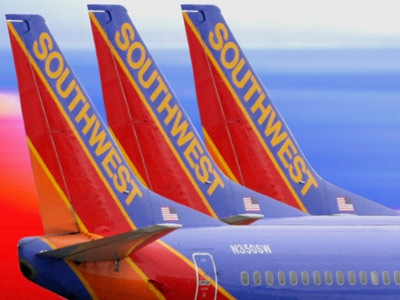 Dallas, Texas 10/17/2013 (Financialstrend) – Southwest Airlines Co. (NYSE:LUV) is a regional airline with a market cap of $11.4 billion. It has been flying passengers since 1970 and employees close to 45000 people. It connects 97 cities spread across 41 states in U.S. Their international operation takes its flights into 6 neighbouring countries. Annually it accounts for ferrying close to 100 million passengers.

This major airline of U.S. stock took off yesterday as the news of an impending deal to lift the federal shutdown started to swirl around on the airwaves. During trading on October 17, the stock crafted a 2.6% increase in its market value. It ended the day at $15.6 per share which is a new 52 week high bench mark.  Airline industry watchers have been commenting on the steady increase in the operational efficiencies that LUV has demonstrated over the past few quarters. In context is the improved revenue per passenger figures for the month of September that Southwest released earlier this month. In September the airlines revenue per passenger mile has gone up by 1.3% to 7.9 billion revenue passenger miles. Company also experienced an 8% increase in passenger revenue per seat in the same period.

It also disclosed that for 3Q of 2013, the airline clocked 27.0 billion RPMs. It also recorded an increase of 1% in its 3Q ASMs to 33.4 billion in the same period while the load factor was 80.8%. Thanks to the strong adherence to performance metrics the airline operations gross margin for the trailing 12 month period was up 50.2% compared to same period in 2012.

Share holders of the airline stock have been paid out close to $0.16 as dividend over the past 12 months. This translates to a 1.03% forward yield on a annual basis. On top of the payouts, investors who bought into the stock 12 months back have seen their investments go up by 77%.