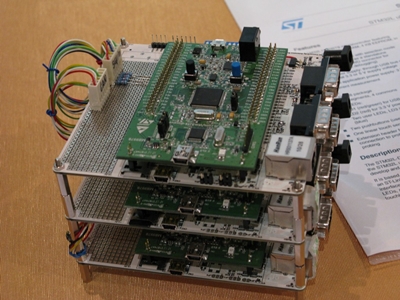 Dallas, Texas 10/08/2013 (Financialstrend) – On October 7, STMicroelectronics N.V. (ADR) (NYSE:STM), has announced dates for its third quarter earnings. It will be released on October 22 after trading is suspended for the day at the New York Stock Exchange. Analysts are hoping to see strong showing from the Switzerland based semiconductor major STM in the back drop of iFixit’s tear down of the recently launched iPhone 5S to determine the various component manufacturers. iFixit has reported that its close to certain that the gyroscope supplier for the iPhone is STM. When this news came out on September 20, InvenSense stock lost close to 4.3% of its value. This was because many trade analysts had come to believe that InvenSense had bagged the contract to supply gyroscope. On the contrary the shares of STM have gone up 6.2%.

The semiconductor major has a market cap of $8.05 billion with annual sales of $8.3 billion. The company has announced dividend payout of $0.4 per share which translates to a forward yield of 4.42% over the past 12 months. It has close to 889 million outstanding shares. On October 7, the shares were trading at $9.05 per share which denotes a 0.66% dip over its previous day close. At current trading levels, the stock price indicates a 8% dip in value over from 52 week high valuation and is 80% up from its 52 week low pricing.

If the news of its components finding its way into iPhone 5S does prove correct, the semiconductor major may manage to turn around its sagging sales numbers. In its previous quarter, the company sales had slid by 4.8% over the previous quarter. Its earnings per share was down 112% for the quarter in the same period. It’s operating and profit margins too were in the negative in comparison to previous quarters.