Stone Energy Corporation (NYSE:SGY) was a massive decliner during Wednesday’s trading session declining by 10% on relatively high volumes, which were 1.6 times the daily average. Stone Energy has been trending lower ever since hitting an intra-day high of $10.12 in October. The stock currently has taken support at its 50 day moving average at $6.56. Traders believe that if the support level is breached, the stock could head to levels of $5.00 in the near term.The index, which measures relative strength has formed a lower high, indicative of the strong bearish presence at current levels. The MACD oscillator has given a sell signal. 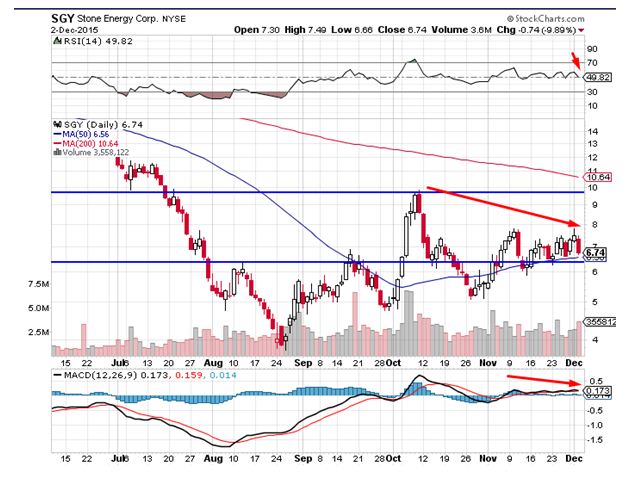 Stone Energy Corporation (NYSE:SGY) released the 3Q15 financial results on November 24 with a net loss of $8.4 million with a $128.4 million revenue from its oil and natural gas reserves. The pre-tax impairment charge in non-cash was $295.7 million as a result of reduced prices of oil and gas, higher transportation costs and the expenses of processing at the Appalachia region. After calculating the charge of non-cash impairment, a net loss of $292.0 million was reported by the company for 3Q15.

According to David Welch, Chairman, President and CEO of the company, the third quarter was a good one for the company as it bought the Cardona No. 6 well and the per day production was appreciated to more than 15,000 barrels.  Amethyst discovery project of the company that started its final stage in September is also moving as per schedule and production will begin in 1Q16. He informed that the company was now stepping up the development of the Cardona No. 7 well that would begin production in 2Q16. The company had also achieved the Pompano platform rig where development would start next year.

The company’s Gulf of Mexico projects were estimated to provide an increase in the year-on-year to compete in the market. Stone Energy is also working on a strategy to cut the operating and overhead expense and the capital spending would be limited in 2016 to help the company achieve the cash flow estimates for the next fiscal.

The company was anticipating that the processing, gathering and transportation costs of the company would fall in 4Q15 as the Mary Field development in Appalachia has been limited. According to the released results, these expenses had cost the company $18.2 million in 3Q15 which were higher than in the same quarter last year when a $16.7 million had been spent on the same. A regulatory proceeding cost the company $2.9 million in the Gulf of Mexico, which also added to the expenditure in the quarter.

The company was working on reducing the administrative and salary expenses in 4Q15 as it was adopting cost cutting measures. The company reported cash in hand to the tune of $63 million on November 2.