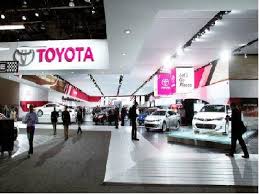 Dallas, Texas 07/05/2013 (Financialstrend) – Shares of the automobile giant Toyota Motor Corporation ADR (NYSE:TM) rose by 0.51% and currently trading at $125.16. Shares of the company remained at the upper end of its 52-week range of $72.04 to $130.99. This was after Toyota issued a global recall for 185,000 vehicles, including its Yaris and Verso – X line of cars. The reason cited was a glitch in the electric power steering system. As result, the steering could be felt heavier, resulting in increased steering efforts at low speeds. It is also expected that such fault could result in warning lamp to go on and the buzzer to go off. The company said that no accidents have been reported as a result of such technical fault.

Such recall should be seen as a panic on the part of company as it often happens that a particular production line may go faulty, resulting in producing defects in a particular batch of vehicles produced. This can be established from the fact that Toyota has seen a 9.8% rise in U.S. sales in June despite making five safety recalls this year, covering more than a million vehicles. Therefore, investors should not lose hope in the company.

However, recalls are frequent in the automobile industry. Earlier this week, the U.S. automaker Ford Motor Co. (NYSE:F) agreed to inspect and repair, if necessary, its 2000 and 2003 Taurus and Mercury Sable models, to avoid another massive recall. The automaker was already forced to recall 13,000 Explorer, Taurus, Lincoln MKS models and SUVs after receiving reports that its child safety lock failed to work on rear doors.  Ford has also recalled another 465,000 vehicles earlier in June 2013 on account of fuel leaks.