Rubicon Minerals Corp. (USA)(NYSEMKT:RBY) was a massive decliner during Thursday’s trading session plummeting by close to 4% on relatively low volumes. The stock has been trending lower ever since it broke below the important support level at $0.430. Rubicon Minerals currently trades below all daily moving averages, which is a seen as a negative.The indicator measuring relative strength continues to languish in the oversold zone but shows no signs of a reversal. The oscillator for momentum continues to point towards strong selling presence at current levels. The stock is currently trading near its 52-week low, which is a bearish signal. 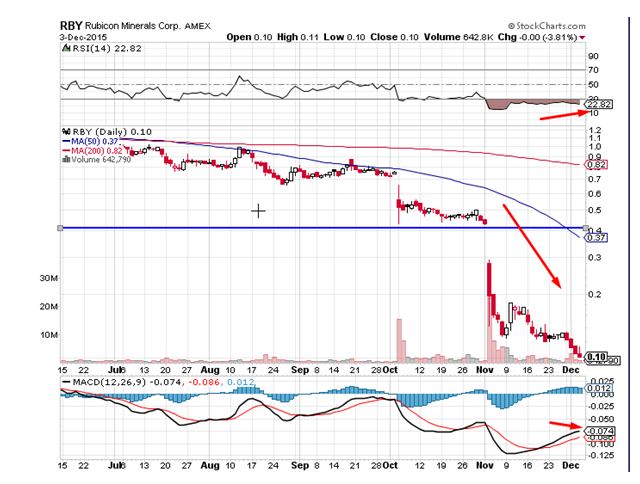 Even before its collapse, investors tracking Rubicon Minerals Corp. (USA) (NYSEMKT:RBY) could notice some nerve-wracking warning signs. Things appeared fine on the surface as the company reported in April 2015 that it was on planned track for first gold production at Phoenix project ongoing in Northern Ontario sometime in mid-2015.

As per the announcement, the company produced the first gold from the mentioned project in the month of June. However, at the same time, Rubicon was expressing very little in the busy period. Its 2Q financials, which were submitted to SEDAR in August 2015 with a press release, reflected the company spent massive amount of funds in the quarter, forcing some analysts to ponder what was going on. In October 2015, Rubicon reported out of nowhere that Chief Executive Michael Lalonde was resigning, and that the firm had milling issues that were almost a month old.

Jason Mayer, a portfolio manager, said that there were some warning signals that showed things were not going as planned. The manager had noticed the warning signs and sold his holdings before the drop. Everything surfaced on November 3, 2015 when Rubicon stopped all underground task at the Phoenix project. The company accepted the geology of the deposit is complex than previously planned and a new development program is needed. The stock declined 55%, and there is increased skepticism about whether Rubicon can finish construction in absence of a large restructuring.

Brent Cook, a publisher, reported that there is likely a deposit there which the company can mine and make profits. At its peak, Rubicon Minerals was worth over six dollars per share. The company raised over $700 million from its investors, which stands at $63 million today. Rubicon’s collapse is a warning story for investors as it didn’t happen overnight. There were several red flags surrounding the company for years which were overlooked by investors in the hype of bullish gold market.