Oclaro, Inc. (NASDAQ:OCLR) was a notable outperformer during Thursday’s trading session rallying by 2.5% on heavy volumes, which were 1.1 times the daily average. The stock has been trending higher forming higher tops and higher bottoms, which point towards strong buying interest. Oclaro currently trades above all daily moving averages.The indicator measuring relative strength provided a fresh buy signal indicative of the strong buying interest. The oscillator for momentum is showing signs of giving a bullish buy signal, which is a positive sign. The stock hit a fresh 52-week high during the trading session, which is considered to be a bullish signal. 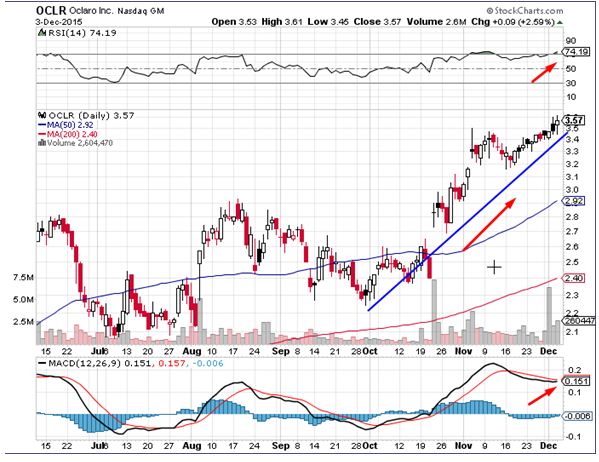 Oclaro, Inc. (NASDAQ:OCLR) is on a high note as its stock price continues to surge higher. The most recent update from the company pertains to its first quarter results of the fiscal year 2016. As per which, the company posted revenues to the tune of $87.5 million, representing a 1.9% dip year-over-year but beating the market revenue estimates by $1.55 million.

Following the earnings release, the company has been receiving positive feedback from multiple analysts. Even hedge funds have gone long on the company’s stock, according to some reports. Zacks Equity Research has been posting positive outlook for the company as a result of a broader positive trend in the industry as well as some encouraging aspects attached to the company.

The research firm revealed that Oclaro has received bullish estimates from a set of sell-side analysts. Based on such revisions, Zacks has assigned a Strong Buy rating to the company. The optimism is also visible in the company’s share price movement, which surged by 3.45% to $3.60 during the pre-market trading hours.